BY MIKE PERCIACCANTE
December 13, 2002
Sign in to view read count 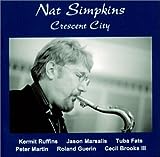 Crescent City is tenor saxophonist Nat Simpkins' fourth CD and undoubtedly his best. Simpkins has created a hard-boppin', soul-jazz masterpiece, giving his sound a touch of that old Nawlins funk. The result is a gumbo of sorts that is rollicking and yet sentimental.

Simpkins brought together a stalwart group of New Orleans musicians to perform six originals and four covers. Crescent City has a timeless quality: the album sounds as if it would not be out of place in a record collection from the '50s. That's a testament to the musicianship of the players. The sound is modern, yet it has that lived-in feel that only a great jazz album can convey.

Crescent City is a musical gumbo, much the same as its namesake, the city of New Orleans. The album is jazzy, yet a strong blues current bubbles just under the surface . This is evidenced by Simpkins' choice of cover tunes, including Sam Cooke's "Shake," plus "One O'Clock Jump," "Do You Know What It Means to Miss New Orleans?," as well as the traditional "Just a Closer Walk." Each tune is jazzy and bluesy. Simpkins' originals also have a blues-jazz flavor, as evidenced by Kermit Ruffins' trumpet and vocals on "Bayou Blues." Other standout originals include the title track and "Calypso Carnival."

Crescent City was made in one long session with no rehearsals, no overdubs, and minimal editing. The disc was made by virtuoso musicians, and it is soon to be a classic.