By Elliott Simon
December 6, 2008
Sign in to view read count 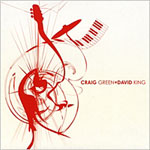 While the best solo jazz recordings reveal an artist's inner thoughts, the most outstanding duos endure as memorable conversations. Guitarist Craig Green and drummer David King allow us to eavesdrop on a wide variety of semi-structured discourses with this stylistically varied, self-titled release. King holds forth on drums, percussion, vibes and piano and, as is apropos of this type of project, displays sides of himself that are not all that obvious in his main gig with The Bad Plus. Green likewise strays from electric and acoustic guitars by mixing in some electronics, adding to the already broad sonic patois.

"Thin Blue Ice" begins the set as a reflective piano soliloquy that is augmented by electronic coloration, while closer "Border Town 1929" reverses roles as Green's guitar delivers a monologue supported by drums and electronics. What makes this an engaging listen though is the fluency that these two musicians articulate on the in-between cuts: "Faux Hawk" presents an escalating give and take between rock guitar and drums; "Part 2" is a minimalist interaction between guitar and vibes; "Rainey Qunciera" is a beautiful vibes and acoustic guitar Spanish language interchange and "Walk Left" portrays a tension-filled electric guitar/piano staccato chat. Three extended pieces allow for some linguistic boundary-stretching as the spacey argot of "Cinematic," the old-timey meets-heavy-metal idiom of "Praise the Shadows" and a "Snow Plow," that learns to speak a funky Latin slang.

This is improvised music that keeps the flashy solos to a minimum, eschews the head-solo-head form and in the process achieves a depth of expression. There are no hackneyed phrases here and the result is original and fresh with few cliches. Green and King are well spoken in their discordant dialects and disparate tongues.