BY EYAL HAREUVENI
August 2, 2014
Sign in to view read count 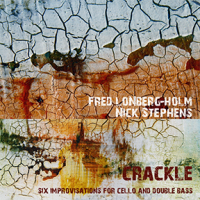 The duo immediately establish a common language that encompasses organic elements of fiery free jazz, through exploration of extended bowing techniques or often simple, straight- forward and lyrical, chamber playing. The two juggle between these shifting elements, to form searching, restless dynamics and and multi-layered textures.

The fourth, 15-minute long improvisation enables Lonberg-Holm and Stephens to explore their shared, searching spirit and the resulting supportive interplay even deeper. Both cover a continuum of sounds. Elegant, poetic bowing, nuanced investigation of the deep and resonant timbral spectrum of the cello and double bass, percussive use of the bows and a changing pulse comprise the spare overtones. The pair perform with great focus, and an impressive command of their instruments, welcoming any sound and any dynamic, whether tough, nervous or gentle and caressing.

An impressive meeting of like-minded improvisers.