BY MARK SABBATINI
December 9, 2004
Sign in to view read count 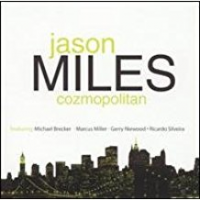 An easy first impression upon listening to Cozmopolitan is that keyboardist Jason Miles is amazingly authentic in getting an impressive roster of players to relive their youth. Examining the linear notes reveals why—it was recorded 25 years ago.

Miles recorded his first project as a leader in 1979 with musicians he continued playing with, such as saxophonist Michael Brecker and bassist Marcus Miller, but couldn't sell it to a label. He came across the master tapes in 2003 and a year later is releasing a collection of eight fusion songs he says has "amazing freshness" due in part to some modern studio tweaking.

Overall it's a worthy dive into the time vault, showcasing strengths and weaknesses of the era. Individual contributions surpass much of today's well-known commercial jazz jingles and many of the funk-oriented compositions are meatier than modern radio fodder. There's also reminders of the cheesy sound and beats that earned '70s music such subsequent ridicule, but they're scarce enough an optimist might tactfully call it a historical contribution.

Those familiar with Miles' considerable number of recordings likely won't rate this as his most accomplished (his 2000 album Celebrating the Music Of Weather Report is an excellent starting point). But it may be the best place to hear his contribution to—and obvious influence from—the era. His unmistakably '70s synth on the title track is punctuated with a raw, rapid-note hybrid funk/swing. He flashes harmonic promise on piano during "Powder" and delivers both a soothing ballad opening and a solid up-tempo nest of support on "Poetry." Some is merely average: His synth-into-organ morphing on "Kashmirian Twist" is colorful, for example, but more busy than original.

Brecker is impressive on the two upbeat tracks he plays, "Gale Warning" and "The Man Who Pushes The Buttons," with his tone and translation of rapid-note classic jazz phrases into fusion painting a clear picture of where a huge number of today's generation got their influence. Miles, it should be noted, turns in another exceptional synth run on "Gale Warning." Miller, on the other hand, doesn't have the dominating presence heard on so many albums where he appears as a sideman. The bassist's playing is certainly sharp, and fans might be interested in hearing a different style, but it's largely a neutral performance where he's outdone by fellow players.

There's actually only six compositions on the album; additional versions of "Cozmopolitan" and "The Man Who Pushes The Buttons" as they were mixed in 1979 are featured at the end. The newer mixes are superior acoustically as individual players are singled out more, but it's interesting hearing the "amazing freshness" of "Cozmopolitan" sound a lot like a dated Spyro Gyra ripoff on the original version.

This is a supplement, rather than a first pick, for listeners interested in the players, but one most fans will want to check out. Its historical insight should tide Miles' devotees over until a rather tantalizing prospect—a dedication to the music of Miles Davis—is released in early 2005.