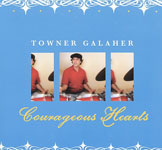 Like Tyson, Galaher works fast: Most of his music comes in under five minutes, with two pieces clocking in around 3:45. In the pop world, 3:45 is an opera; in jazz, it's the equivalent of an e.e. cummings couplet. Short should not be confused with sparse, however, as Galaher and his partners prove there's a lot than can be done in five minutes (or less).

Continuing the Tyson metaphor, the front line comes out swinging on the opening title track, playing big meaty lines as Galaher lays down a colossal beat, wonderfully accentuated by Gabriel Machado's congas. The piece feels like big band, but its aggressive structure and R&B sensibility puts it closer to Brecker-esque "Punk Jazz." Brian Lynch's trumpet solo doesn't aim for the back of the room—it shoots for the parking lot outside the building. Craig Handy follows Lynch's lead, playing titanic tenor sax lines, while George Colligan's piano comps become a percussive counter solo. The closing time-signature change rolls the music out in waves, leading to a knockout finish—the first of several on em>Courageous.

The onslaught never really stops as piece after piece flies in, administers a musical beat-down, and flies out just as fast: "Boogaloobop" morphs from Punk Jazz to quicksilver bebop as Fred Wesley's trombone tears gaping holes in the track; Handy gets his scream on during "April 28th (Vivre Egale A Vous Méme), both at the front end and in a three-way throw-down with Wesley and Lynch on the rideout; "Londel's" has Colligan painting with deep, hard blues, and percussionist Ze Mauricio helps Galaher jack up the carnaval spirit of "Second Line Samba."

Courageous aims to thrill, and Galaher certainly does that. While his takes on the standards "Hot House" and "Afro Blue" are good but unsurprising, Galaher's originals go for the heart and the gut, speeding up the former and warming the latter. His drumming has power to spare, as evidenced by how well he matches up with his massive front line. Unfortunately, Galaher seems to see every drum part as a nail, while he is the big hammer. Even on a softer piece like "Winter Sunrise," where a little more nuance could have gone a long way, there's the sense that Galaher can't wait for his next chance to start thrashing his kit again.

There's no question Towner Galaher has big talent and a bright future as a leader. But instead of the textured approach of Eric Harland, who can tear it up when circumstances call for it, Galaher's relentless attack is more reminiscent of rock legend John Bonham. There must be more to Galaher than that, and hopefully he'll show it next time.