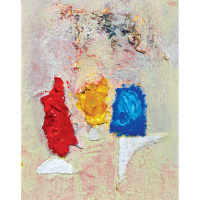 Bassist Rob Clutton has been a regular presence in the Toronto jazz scene for some time, having begun his recording career in the mid 1990s, subsequently working within a cluster of fellow Canadian improvisers, including efforts with Lina Allemano, Nick Storring, Nick Fraser, and Karen Ng. The latter two are integral components of Counsel of Primaries, a compelling venture into well-crafted music that straddles the line between an abstract chamber aesthetic and jazz-based improvisation.

Clutton is credited with composing all ten of the album's tracks, but the musicians' unmistakable concord gives the recording a fundamentally cooperative aspect. Ng possesses a striking vulnerability on alto saxophone, whether entwined with Clutton's languid arco on the elusive and moody "Sterling" or on the album's rhythmically subtle opener, "Strata," where her single-note repetitions and evocative phrases build in transfixing rapport with drummer Fraser's cymbal patterns. Even "Festival," a spry and bouncy groover, seems tinged with a bit of melancholy, with Ng's carefully chosen expressions muting the celebration ever so slightly.

Listeners who expect immediate gratification will likely be disappointed. The closer, "Magnetic," unfolds at an exceedingly deilberate pace, taking shape amidst Fraser's fine brushwork and with Clutton's pensive, expansively-spaced notes supporting Ng at her most introspective. The well-titled "Cloak" develops with a bit more fervor, but only once the initial air of quiet mystery gives way to a more determined tempo during the second half of the piece.

The trio does depart from the prevailing modus operandi on "Thing One," where Ng's exuberant, frolicsome lead solo soon takes the group into some energized free-bop, and the album's title track similarly charts a more obstreperous terrain, with Fraser's fractious interjections punctuating an especially animated conversation between Clutton and Ng. But for the most part, the album keeps to a more reflective spirit, in which the players reveal as much in their pauses and silences as in their more direct expressions.