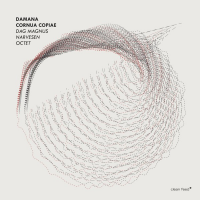 At times there seems no end to the bewildering stream of talent emerging from the Norwegian jazz scene. Fresh off the conveyor belt comes drummer Dag Magnus Narvesen whose Damana Octet functions more akin to an even larger ensemble, thanks to some expertly voiced charts. On the roster are some increasingly familiar names, such as saxophonists Kristoffer Berre Alberts and Andre Roligheten, alongside a welter of less well known but equally skilled compatriots. In its blend of concise yet integrated solos and exciting arrangements, the program calls to mind reedman Ken Vandermark's signature quintet.

Narvesen, who wrote all the tunes, takes the big band tradition and gives it a smart contemporary twist. It's all done without irony or pastiche, and presents a coherent facade in spite of the stylistic diversity. For example "Chokolypse" alternates spiky staccato with lilting ballad swing without it feeling contrived, then concludes with an unaccompanied piano coda. And he pens some lovely melodies, none more so than the gorgeous "Irgendwie, Irgendwo," with Haydn Powell's melancholy contrapuntal trumpet and Kristoffer Kompen's lush trombone excursion.

At its best the Octet extends the bounds of the canon through the adventurous personalities on board. Notable is Øyvind Dale's choppy percussive piano on "Tapatapa," and the disjunct pulsations from Jorgen Mathisen's tenor and Narvesen's drums to open "Dalbrecht," which proceeds by way of a hard driving baritone saxophone vamp from Roligheten and interlocking brass figures.

Importantly the band sound as if it's having fun. "Palettfasett" veers between Latin and Dixieland, while "Mannen i tårnet" with its engaging amalgam of punchy unisons and astringent fanfares, separated by tightly coiled drum breaks still finds space to include a dramatic solo piano interlude, a passage for Adrian Myhr's resonant bass and drums and duelling baritone saxophone and trumpet in its three minute span. The album closes on yet another high note with the elegiac hymnal "For J.R.M." powered by the leader's tappy cadences and featuring Roligheten's altissimo bass clarinet wail.