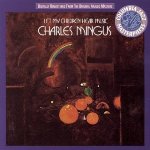 Following upon the first-time release of Mingus At UCLA 1965 (Universal 2007), which afforded penetrating if uneven glimpses into bassist Charles Mingus' creative process, this two-disc release offers more satisfying music and a fuller picture of an earlier and smaller but more distinguished Mingus ensemble—the fabled 1964 touring unit that would be recorded later that same year in Europe. Though Eric Dolphy understandably will always be a magnet, each of the soloists is heard to maximum advantage on this earlier American concert.

As is the case with the later date, pianist Jacki Byard opens the concert with a solo that's equal parts James P. Johnson and Art Tatum, and Mingus follows immediately with his own solo showpiece on Ellington's "Sophisticated Lady." Tenorist Clifford Jordan issues another wake-up call to his undeniable talent, submitting a solo as impressive as Dolphy's on "Fables of Faubus"; and the elfin, enigmatic loner, Johnny Coles, rather than coming up MIA as on the previously released, later European recording by the group (The Great Mingus Concert, Verve 2004), has ample space to remind us why he was Gil Evans' favorite trumpet player after Miles.

The audio is better than has been reported: Richmond's drums are distant and muffled in the mix, and the maelstrom gets a bit muddy during the more heated ensemble passages. But Mingus or Dolphy completists (Dolphy's flute is especially impressive on a flying "Jitterbug Waltz") will find little reason to pass this one up.

Rate Mingus at Cornell 1964 just behind the same Mingus group on Verve's The Great Charles Mingus Concert. As welcome as Coles is on the present Blue Note recording, he's neither a deal maker nor breaker. Moreover, on the later date the five-member Mingus "sextet" seems to go the extra mile to make up for the absence of Coles' coy trumpet. The playing is more fiery (especially Jordan's solo on "Fables of Faubus"; the exchanges between Dolphy and Jordan more explosive and exciting (especially on a hard-driving "So Long, Eric"); the all-around behavior of Mingus, musically and otherwise, more responsive to the crowd and occasion during the concert in Paris. Finally, the audio on The Great Charles Mingus Concert, while not exactly pristine, is more "present" and clearly defined.

Mingus at Cornell may be seen as essential preparation for the big event, but the more casual listener can hardly be blamed for passing up the preliminaries and going straight to the main course.