BY DAN MCCLENAGHAN
October 26, 2008
Sign in to view read count 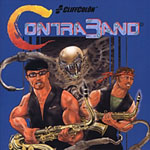 Tacoma, Washington-based saxophonist Cliff Colon takes his inspiration where he finds it. In the case of his debut CD, Contraband, the inspiration comes from music of the 1980's side-scrolling, run and gun, eight-bit video game called Contra, which seems an unlikely source.

But unlikely sources are pretty common in the jazz genre—Miles Davis' reading of "Surrey with the Fringe on Top," taken from the Rodgers and Hammerstein musical, "Oklahoma," John Coltrane's classic take on "My Favorite Things," Sonny Rollins blowing "I'm An Old Cowhand," or, to bring things up to the present, Brad Mehldau's twenty-plus minute rendition of Soundgarden's "Black Hole Sun." The list goes on—jazz artists grab their ideas from all over the place.

Colon has taken the soundtrack of the video game (tunes penned by Kyohei Sada and Hidenori Maezawa) and re-worked it into the jazz format with a high-energy sizzle of sound—two blistering saxophones in front of a hot piano Rhodes/guitar/bass/drums rhythm.

A good portion of the disc fits the 'stamp the accelerator to floor' mode, beginning with the barn-burner, "Jungle." That gives way to a 'prowling the dark streets' vibe of "Base," featuring a couple of fiery and eloquent sax solos.

The music is inspired and modern-sounding from start to finish, with a highlight, "Snow Field," at nearly ten minutes—the longest cut on the disc. The tune builds a rather ominous ensemble momentum from a drifting rumble to a saxophone blow-fest that segues into a Rhodes piano rumination, then back to the edgy intricacies of the sax-led sound.