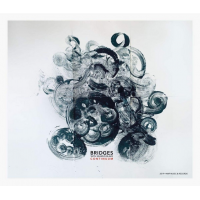 The follow-up to Bridges' eponymous debut album (AMP Music & Records, 2016) is no less spectacular an affair. It sports the same line-up as before with the exception of Jesper Bodilsen now taking over bass duties from Ole Morten Vågan. Once again Seamus Blake leads this group of Norway-based musicians to great success. Not a lot of people know that Blake and Hayden Powell were both born in England, but the saxophonist was raised in Vancouver, Canada, and is now a resident of Paris, France. Meanwhile, Powell moved to Norway as a child, where he grew up in Molde.

Both "The Clues" and the ensuing "Andromeda" contain truly sumptuous ensemble arrangements that bookend florid solos from Powell, Blake and pianist Espen Berg. The confident stridency of Blake's "The Jupiter Line" sees the front line's unison-phrasing of the memorable melody subsequently adorned by a lengthy and powerful tenor solo. Jesper Bodilsen's resonant pizzicato bass leads on the Powell-composed number "Slightly Behind," embellished by more ensemble horn punctuations and limpid piano from Berg. There's fragile harmonic interplay between the two horns on the languorous "Mareel," and equally elegant lyricism on Bodilsen's "No Road For Readers," with Powell at his most mellifluous.

Of the two collectively-improvised tracks, "Two" is a duet between Blake and Berg whilst the closer, "Fanfare" is a short, emotionally-charged sortie by the quintet, where Powell's echoey trumpet initially takes centre stage. The European feel to this album should be regarded as a resounding compliment since on Continuum the quintet successfully eschews mundane rhythmic clichés, preferring instead to opt for sonorous harmonic structure and lissom solos. As a comparator, one might well look to an album such as Kenny Wheeler's rhapsodic Double, Double You (ECM, 1984) and that's high praise indeed.

Introduction; The Clues; Andromeda; Slightly Behind; Mareel; The Jupiter Line; Two; No Road For Readers; Fanfare.

About Bridges With Seamus Blake