BY JACK BOWERS
February 3, 2017
Sign in to view read count 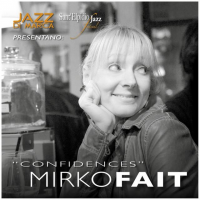 Here's more clear evidence courtesy of Italian-born saxophonist Mirko Fait's quintet that tasteful jazz doesn't run its course at America's borders. These are accomplished musicians who know how to swing and can hold their heads high in any company, foreign or domestic. On the other hand, there is nothing here that sets Fait's group apart from many others of its size and makeup; it is simply a well-schooled working ensemble doing its thing, no more and no less.

Fait, who plays soprano and tenor sax, is joined on the front line by flugel Roberto Piermartire, who, like Fait, is an accomplished musician whose solos are invariably polished if not otherwise exceptional. Pianist Antonio Zambrini is another strong soloist, while bassist Rodrigo Amaral amplifies the group's persona by adding his husky baritone on four selections. The quintet's other member, drummer Roby Giannella, is a solid timekeeper who tends to his duties without stepping on anyone's toes. Guitarist Giampiero Spina adds a pastel solo voice on "Sad Eyes Child," "B Mine" and "Funny Day."

The program is composed primarily (eight of ten tracks) of compositions by Fait, and they are melodic and charming if less than memorable. Several are in a Latin mode including Amaral's vocals on "Quanno Chiove," "Rebecca Smile," "Nada Mais" and "Aquarela." While the quintet is pictured on the inside jacket performing at the Sant' Elpidio Jazz Festival, Confidences was recorded in a studio, most likely at Fait's home base, Milan. Other particulars are elusive, as the liner notes are in Italian.

What is most germane, of course, is whether Fait's quintet is proficient and worth hearing, and the answer to that is yes. The songs, all originals, are for the most part bright and charming, and the quintet plays them well. Although there is nothing here that blazons superiority, neither is there anything that is less than well-managed.