BY GEORGE KANZLER
November 23, 2006
Sign in to view read count 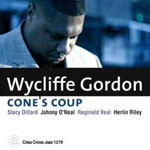 Back in June, Wycliffe Gordon was awarded the Jazz Journalist Association's Trombonist of the Year honors. Cone's Coup is a good showcase of the artistry that helped him win that award. Gordon's approach to the trombone is like Sonny Rollins' on the tenor sax: a complete mastery of techniques through the entire range, with attention paid to producing a variety of tones and timbres, always with a robust sound.

Gordon's last Criss Cross CD, In the Cross, featured a gospel choir in his jazz versions of spirituals. Here he concentrates on exploring the blues and a couple of ballads, with a quintet filled out by tenor saxophonist Stacy Dillard, pianist Johnny O'Neal, bassist Reginald Veal and drummer Herlin Riley. The latter two worked extensively with Gordon in Wynton Marsalis' septet and the Lincoln Center Jazz Orchestra, evident by the way they lock into grooves here so solidly.

On the opening "Shhh!!! (The Band is Trying to Play) and closing "Hush Yo' Mouf!!," a further reprise of that opener, Gordon scolds a noisy audience in song (these are the only vocals on the disc) as well as through an agitated, plunger-muted solo. Miles' "Walkin' lends inspiration, and a coda to "Yaht Doo Daht Ditt, a fast original blues, finds the leader ripping into a solo that rises to the slippery horn's upper reaches.

"Blues for Alice's Freight Train, combining Charlie Parker and Tommy Flanagan blues in sequence and then in tandem by the horns, and Coltrane's "Mr. P.C., pitting the horns against each other in a pianoless quartet, are typical of the arranging challenges that Gordon uses to produce a constantly engaging album.