By Woodrow Wilkins
August 5, 2006
Sign in to view read count 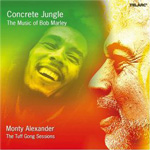 Bob Marley lives. Though the legendary Jamaican songwriter/musician left this Earth in 1981, his music and, therefore, his spirit remain with us. Among those keeping the Marley sound alive is Jamaican-born pianist Monty Alexander. After recording more than sixty solo albums, Alexander joined the Telarc family in 1999 with the release of Stir It Up, a blend of acoustic jazz and reggae rhythms that served as a tribute to Marley. Seven years later, the pianist is at it again with Concrete Jungle - The Music of Bob Marley.

Over the years, Alexander has performed or recorded with such diverse talents as Frank Sinatra, Ray Brown, Dizzy Gillespie, Sonny Rollins, Quincy Jones and Ernest Ranglin. In 1991, he joined Natalie Cole for Unforgettable, a tribute to father Nat "King Cole which earned seven Grammy Awards. Alexander also has been a fixture at the Montreux Jazz Festival since 1976. Through it all, he has seamlessly moved from acoustic jazz to reggae, points between, and back.

Marley's legacy is owed largely to his use of music as a cry for freedom—true freedom. This comes clear in the title song, "Concrete Jungle. Guitarists Wayne Armond and Junior Jazz share lead vocals on this anthem for social change, singing, "No chains around my feet, but I'm not free." With Alexander's piano on point, these two musicians help remind us that although slavery no longer exists in the Americas, its residual effects are ever-present.

Trombonist Delfeayo Marsalis leads on the instrumental "No More Trouble and "Crazy Baldheads. He is also featured on two other tracks. Guest vocalist Luciano joins the ensemble for "War, which features several members of the band as vocalists. With dynamic percussion performances, the song communicates the message that there will be no peace until all people are treated fairly and race is no longer a tool for division of haves and have-nots.

Alexander's piano is featured on the elegant "Babylon System, which has an easygoing melody. Throughout the album, Hassan Shakur and a pair of electric bassists, Glenroy Browne and Courtney Patton, take turns providing that driving beat that helps set the rhythm. The bass is perhaps strongest on "Forever Lovin' Jah, a nearly seven-minute instrumental that features Alexander on point; drummer Herlin Riley keeps time while mixing it up well with the cymbals, snare and toms. Riley breaks through at about the 5:40 mark with a thrilling solo that sets up the closing sequence.

As the album progresses, it's clear that Alexander isn't concerned with making it about him. He is one with the group, stepping out here and there to play lead or deliver a solo, but often melding into the background while the other musicians and vocalists share the spotlight. The process works. Concrete Jungle is a total group effort, with each member as an equal partner. And that is in the spirit of Bob Marley.