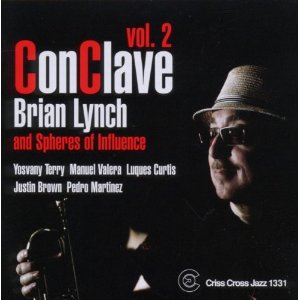 Long an exponent of Afro-Cuban rhythms and Latin jazz music, trumpeter/educator Brian Lynch presents a fine selection of originals and standards in another Latin-styled album, grounded in a strong modern jazz foundation. ConClave Vol. 2 draws on obvious elements of Latin music and contains the influence within a framework of a jazz project, as opposed to a typical, overtly expressive Latin jazz statement.

On ConClave (Criss Cross, 2004), the majority of the tunes such as the blazing "Tom Harrell," "Awe Shocks," and "La Mulata Rumbera," offer a generally hot session of Latin jazz. This second installment does tone down the tempo a bit without sacrificing the syncopated two-bar rhythm that is the basis of Latin music, known as clavé.

Lynch not only forges a new approach to the percussive genre, he does it with a new incarnation of his Spheres of Influence jazz project, using an entirely new cast of players including alto saxophonist Yosvany Terry. pianist Manuel Valera and percussionist Pedro Martinez,—three Cuban-born players lending a significant cultural element to the music.

The album's fiery pieces start on "With a Single Step" where Lynch and Terry's exchange heats up the music. The Latin rhythms come through brightly on Miles Davis' "Solar," while "One for Armida" rounds out the steamy selections with Lynch's sizzling horn-blowing matched by hard play from Martinez and young drummer Justin Brown

"The Downside of Upspeak" opens the album in the modern jazz tradition, with little to no real Latin flair, while Charles Tolliver's "Truth" provides the album's only slow and delicate ballad. "Magenta's Return" is one of the highlights of the disc, a stellar piece featuring dazzling moments from Valera, Lynch and Terry. Lynch's "Dance the Way U Want To" has a true Latin beat, invigorated with more Latin flavoring than the trumpeter's original 1991 chart.

Kenny Dorham's straight blues, "Blue Friday," bookends a Latin-styled album with the most traditional jazz piece of the set, featuring Terry, Valera and young bass sensation Luques Curtis, all having superb solo moments. Lynch completes another fascinating Latin jazz session, proving, on ConClave Vol. 2, that an interesting meld of Latin and traditional jazz can be a successful vehicle.

The Downside Of Upspeak; Truth; With A Single Step; Magenta's Return; Solar; Dance The Way U Want; One For Armida; Blue Friday.