By Dan McClenaghan
July 6, 2004
Sign in to view read count 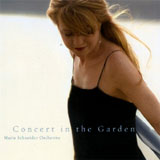 Composer/arranger Maria Schneider, at the helm of her seventeen-piece orchestra, soars back and forth over the blurry line that separates classical music and jazz on Concert in the Garden , her first CD offering since 2000's Grammy-nominated Allegresse.

With Schneider's compositions, movement seems always a theme. From her gravity-defying "Hang Gliding" on Allegresse to her dance-inpired suite, "Three Romances" here, the composer is always pulling the listener into complex, swirling and majestic musical narratives. Dance inspires Schneider, and indeed her music evokes images of lithe women in flowing vestments, pirouetting, gliding gracefully in and out of swirling mists.

Jazz or classical? On these five fully developed pieces, the orchestra wraps itself around—in loving embrace—stunningly inpired solos by Ben Monder (guitar), Ingrid Jensen and Greg Gisbert (fluegelhorn), Rich Perry and Donny McCaslin (tenor sax), Frank Kimbrough (piano), Charles Pillow (soprano sax), and Larry Farrell (trombone). Improvisation or written out notes from Schneider's pen? The guess here is they're written out with latitude allowed. With classical music, it's all about the composer; with jazz, its more about the instrumentalists. There's just too much personality in every solo here to think they are completely scripted; but then they all fit so seamlessly into the greater whole it's hard to believe it's total improvisation. Not that it matters. What we end up with is the depth and grandeur of the classical side entwined with the spirit and fire of jazz.

Donny McCaslin's tenor sax sears the air in front of a gentle rise and fall of orchestral surge on "Buleria, Solea Y Rumba"; while Ingrid Jensen's fluegelhorn does a willowy dance with Charles Pillow's soprano sax on "Pas De Deux"; and Ben Monder's guitar solo on the opener/title tune is absolutely arresting, luminous, with its ringing keyboard-like chording leading into a spare set of succinct single notes that introduce Frank Kimbrough's piano solo.

I hesitate to single anyone out on such a collective effort, but Kimbrough is a major factor in the success here. I've listened to his sound on Ben Allison's discs—eg. Buzz (Palmetto, '04)—and thought him a real talent, but his work here is truly inspired, with transcendent ideas flowing from his keyboard on three separate solo slots; and you've got to think that the dancer in Maria Schneider is taking him by the hand and leading him onto different level of musicality.

Schneider incorporates the accordion of Gary Versace here, prominently, on the title tune, and the cajon—the box-like flamenco percussion instrument—on the closer, "Buleria, Solea Y Rumba," with magnificent results, adding the flavors of Spain and, more prominently, Brazil into her sound.

A hugely ambitious, completely successful and stunningly beautiful effort, Concert in the Garden is absolutely indispensible to anyone interested in orchestral jazz or jazz-infused classical sounds.