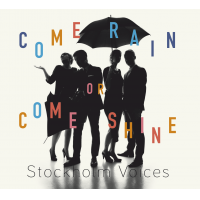 Stockholm Voices is a Swedish jazz vocal quartet who join the company of The Manhattan Transfer, New York Voices and the newly minted London, Meader, Pramuk and Ross. But, Stockholm Voices brings something very different to the tables in the way of a retrospective style. Rather than the bebop lightening bolts thrown off by the greater field of jazz quartet vocals, the Stockholm Voices harken back to a time when the Mills Brothers and the Andrews Sister were developing their swing chops before and during World War II. Tight harmonies that lilt and sway. No stringent eighth notes here, just clear harmony (almost) conservatively rendered.

It is a gas to hear the title tune in English followed by the traditional "Jag vet en dejlig rosa (A Beautiful Rose)." The melody will be readily recognized by the listener. Placing it is another thing altogether. It is (necessarily) a Scandinavian melody best suited for the holidays. The Stockholm Voices summon an image of standing around a warm bonfire drinking Glühwein and the family Christmas party. Lush and soft are the harmonies, tightly conscripted in an a capella introduction that gently slides into a waling bass and brushed snare drum and block chords. Ensemble scat singing reaches a new level of competency, as if the aforementioned Mills Brothers and Andrew Sisters riffed on some reefer, put their dark glasses on to blow, mighty, blow.