By BRUCE LINDSAY
November 6, 2018
Sign in to view read count 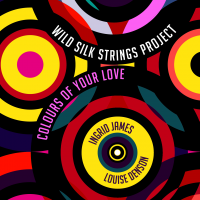 The Wild Silk Strings Project is a collaboration between the Australian duo of singer Ingrid James and pianist Louise Denson, joined by half a dozen fellow Brisbane-based musicians and American saxophonist Paul Greggors White and percussionist Christopher Todd Harrison. The project first recorded on 2006's Portrait and Colours Of Your Love offers a similar mix of original songs (mostly co-written by James and Denson) alongside cover versions, mixing easy-listening hits (Gordon Lightfoot's "If You Could Read My Mind," Supertramp's "The Logical Song") with French classical music (Erik Satie's "Gnosienne No. 1"). It's a beautiful recording, a stylish mix of strings, jazz instrumentation and James' exceptional voice.

Two covers stand out. A laid-back version of k.d. lang's "Constant Craving," with a relaxed, waltz-time, rhythm, is a successful and refreshing take on the original. James' considered and precise vocal giving the lyric a romantic and personal feel while Greggors White's tenor solo adds a wilder edge to the performance. A soulful version of Carole King's "It's Too Late" is another great example of Denson and James' ability to approach well-known songs with fresh ears and voices: in this case, hip-hop inspired rhythms and smooth horns underpin James' vocal.

The Satie and Supertramp numbers are less successful. Satie's "Gnossienne No. 1" is usually heard as a solo piano piece, starkly beautifully. James and Denson's arrangement features James's wordless vocal, muted horns and plenty of percussion—closer to a Phil Spector production than it is to the diminutive French composer's original, it loses the emotional impact engendered by the starkness of the solo performances. Supertramp's "The Logical Song" is driven by Harrison's percussion and features another strong string arrangement, although even James's faultless vocal can't overcome the pretentious lyric about radicals and vegetables.

James and Denson's own songs are uniformly strong. "Flame Tree" features another wordless vocal, but this time it's more in keeping with the piece, adding to the sultry and danceable rhythm. "First Love" opens as if it were played on a scratchy shellac disc then morphs into a mellow, Latin-inspired, love song with atmospheric contributions from the strings and trumpeter Paul Armstrong. The closing trio of songs are all originals, notable for strong ensemble performances and, as ever, James' beautiful vocals.

Gnossienne No. 1; Constant Craving; Flame Tree; First Love; Tristeza de Amar; Wild December Wind; It's Too Late; The Logical Song; If You Could Read My Mind; Colours Of Your Love; Maybe Tomorrow; Gone Too Soon.