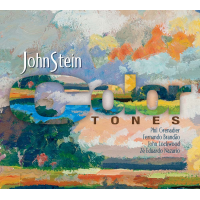 Even though everyone in the ensemble is a talented soloist, the emphasis for the most part is on sharp and lively rhythms, more often than not with a Latin / Caribbean flavor. Exceptions are the shapely ballad "Jo Ann," written by Stein for his mother, and the leisurely "Salt Marsh Down." Stein penned every number save the Matt Dennis / Earl Brent standard "Angel Eyes," whose likeable mid-tempo reading is introduced by Nazario's drums and enhanced by Brandao's nimble flute solo. Stein's modest, plain-spoken compositions set the rhythmic compass and serve as a durable launching pad for the soloists.

The Caribbean influence is clear on the sunny opener, "The Commons," as well as on "New Shoes" (a rhythmic cousin to Bird's "Little Suede Shoes"), and there is more of the Latin ethos on "Labor of Love," on which Grenadier's flugelhorn and Brandao's flute amplify Stein's lithe guitar, and "Four Corners," once more showcasing Brandao's tasteful flute. The blues has its moment on "Five Weeks," bop on the groovy "Ebb & Flow" (with Brandao on bass flute), unbridled swing on "Neck Road" (deftly introduced by Nazario). Grenadier's muted trumpet is especially persuasive on "Five Weeks," while Lockwood's bass is sure, strong and impressive on every number. Grenadier and Brandao trade well-designed salvos on the well-polished "New Shoes," after which Lockwood weighs in with a cogent statement of his own.

Although Stein is the nominal leader, Color Tones is by any measure a group effort, with Grenadier and Brandao given ample room to extemporize (and accentuate the various melodies) while Lockwood and Nazario are indispensable allies in the trenches. A splendid quintet date with much to offer the perceptive listener.