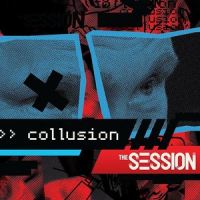 The Session are four very talented musicians from New Orleans with a good grasp of their place in jazz history. They play music from New Orleans. It's their own, not trad and it's extremely good. Unfortunately they also fancy themselves as political activists, crudely attacking the admittedly crude Trump administration. Hence the album title, Collusion and track titles "Bigly," and the awful "Kelly Ann Con Artist," which childishly seeks to lambast Trump's former political adviser, Kelly-Ann Conway.

Their publicity features a collective, portentous quote allegedly from the entire band: "We have now reconvened to speak our truth and hopefully shed some light along the way. This album protests our current leadership's unethical actions."

If, in speaking their truth, the music stays tight and interesting, fair enough. David Frick, of Rolling Stone magazine, aptly described it as "hot and sharp" and went on to praise the band's "superb musicianship, youthful energy and verve and high degree of compositional sophistication."

"6/8 Tune" starts off dreamily then segues into something more up-tempo and interesting. It is followed by "Terms of Surrender," which contains echoes of old romantic films from Hollywood in days gone by. Or is it a reflection on Donald Trump's haircut?

Then comes "Five Fingers of Death," a send-up of martial arts movies, by pianist McGowan—witty and succinct.

"Bigly" bounces along in fine style, featuring Jasen Weaver on bass and Darrian Douglas on drums, mingling what the publicity accurately calls "grace, passion and soul."

The publicity sums up the album thus: "Collusion demonstrates The Session's commitment to offer a reflection and insight into today's socio-political climate through the medium of jazz."

Whether jazz can actually do this is another matter but if the result is good music, then who cares?

Monk Dancing on the Levee; 6/8 Tune; Terms of Surrender; Five Fingers of Death; Return of the Session; Price of a Dream; Kelly Ann Con-Artist; Bigly; Kolmas Linja; This Blues