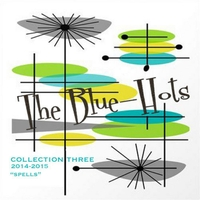 The Blue-Hots is a jazz group that will immediately attract you with their funky and exotic music. Collection Three: Spells took two years in the making due to many factors. You will witness varying styles that makes every track fresh and exciting.

The first song, "Gimme Something," is electrifying. The guitar work in the song is noticeably exemplary, and the percussion also synchronizes perfectly with the vocals. It is fast and rhythmic. "Do You Think It Matters" has the same energy, but carrying an entirely different vibe. Its progressive melody maintains the enjoyment that you earned from listening to the album's previous tracks. The oohs and aahs in the tune are hypnotic and equally mesmerizing. It has a thicker melody, though, which ultimately makes up the song's unique identity. A track that is familiar yet refreshing to the ears.

"Easy to Fall," from the intro alone, will already catch your attention. The song showcases the vocal trio's singing prowess. The instruments also provide superb performances that harmonize well, making it seem like a big choir is nailing every note and lyric.

Overall, this is a grandiose, diverse, and fun record. The Blue-Hots inject plenty of creativity in their music as they juggle many styles and even the moods of each cut differ. The album has the depth and flavor of the 1960s, added with spices of their own. This is music that will keep you entertained and hooked.