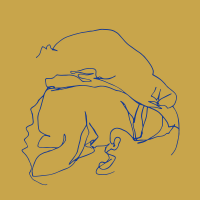 The improvising trio Found Drowned comprises guitarist James O’Sullivan, a long-standing member of Eddie Prevost's Friday night improv workshop , bassist Peter Marsh and drummer Paul May, who together are one half of the quartet Fourth Page . The three first played together in 2010, releasing their eponymous first album in 2012. The studio-recorded Clownslave comprises two tracks, the thirty-five minute "Clown" and twenty-five minute "Slave." The album is available on cassette and/or download, the cassette versions each being twenty-minute edits. Whatever one's expectations of an electric guitar-electric bass-drums trio, the chances are that Found Drowned would bear little resemblance to them. The group themselves say that they have no manifesto, method or mantra, and they don't really talk about what they do.

Despite its title, "Clown" is no laughing matter, instead featuring a full soundscape throughout, to the extent that any more sound would have risked overcrowding it. A rumbling, bottom-heavy opening, courtesy of Marsh, makes thrilling listening and provides a rock-solid foundation over which O'Sullivan and May separately explore their instruments; sometimes they produce sounds which are identifiably from drums or guitar but, just as frequently, the results are more abstract. Overall, there is a satisfying balance between music and noise, and the piece maintains a recognizable pulse without any of the three obviously acting as time-keeper. It is soon obvious why Found Drowned don't really talk about what they do; their communications are musical rather than verbal, and each understands the others well, the whole working as a three-brained entity.

"Slave" is in complete contrast to "Clown" while displaying the same strengths. Marsh and May subtly provide a rhythmic framework within which all three can explore freely; no-one plays anything resembling a solo; the contribution of each individual can be heard loud and clear throughout, the three strands weaving together well into a coherent piece which stands up to repeated listening, revealing more and more over time. A great success.