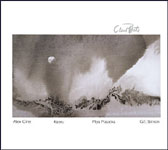 Sometimes it's all about context. A week after his previous studio effort, The Constant Flame, was recorded, percussionist Alex Cline was reconvened with guitarist G.E. Stinson and vocalist Kaoru from that session, also adding koto player Miya Masaoka, for a day of purely unstructured improvisation. The resulting album, Cloud Plate, is, to a large extent, in direct contrast to the more clearly constructed, albeit inarguably experimental, nature of The Constant Flame.

Still, what is remarkable about Cloud Plate is how, while the eight pieces seem to conceptually flow together into what feels like a continuous 66-minute experience, they each also exhibit their own distinct logic. And in the face of unabashed free playing, Cline, Kaoru, Masaoka, and Stinson develop specific sonic landscapes that are largely about texture and ambience rather than more traditional concepts like rhythm, harmony, and melody.

Describing what they do as ambient and textural might, however, imply a certain overriding tranquility when, in fact, the overall complexion of the album leans towards something darker. Despite that 'Ions," even with the abstruse nature of Masaoka's koto and Kaoru's delicate vocals, is about an prevailing sense of calm—although Cline's percussion occasionally punctuates the peace and Stinson's effects-laden guitar creates a more haunting underpinning. "Cloud" is more distinctly ambient in tone also, but could never be relegated to the background. As ungrounded as Cloud Plate sometimes is, it demands attention.

More rigidly defined roles are discarded. While it would be presumed that Cline would provide whatever kind of pulse there is to be found—and he does generate some regularity on "Visual Drift"—he is more about color than rhythm. On "Robot Mudra," what pulse exists is provided by Stinson, albeit so sonically transformed as to be almost unidentifiable as a guitar. On "Naming," the koto provides the hint of forward motion.

With everyone but Cline contributing some form of electronic manipulation, and with a number of Cline's instruments being so unconventional, determining who is doing what becomes almost an exercise in futility. Other than Kaoru's voice (which is sometimes so electronically manipulated as to be nearly unrecognizable), Masaoka's koto, and the drums—when Cline resorts to a more traditional kit, as he does on the chaotic "Assisted Collapse"—the players are more concerned about contributing means to an end. It's not about such strict concerns as soloing; it's about creating mood and timbre.

Cloud Plate, by never being anything less than intrusive, is rarely an easy listen. Dissonance abounds; things are often so nebulous and tenuous as to provide few handles to grasp. And yet, with sensibilities that come from as far afield as free jazz, multi-ethnicity, electronically generated music concrete, and the avant-garde, Cloud Plate manages to assert its own complexion. It's not for the faint of heart, but those with an open mind and unrestricted imagination will find Cloud Plate never less than completely compelling.