BY WILBUR MACKENZIE
October 12, 2008
Sign in to view read count 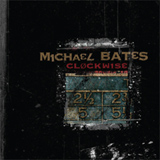 On Sep. 17, 2008, bassist Michael Bates’ band Outside Sources took the stage for two sets at Cornelia Street Café to celebrate the release of Clockwise, proving itself to be a tight unit that reveled in richness, unpredictability, astounding technical ability and near-telepathic interaction. The press material surrounding the CD directly referz to pianoless quartets led by Ornette Coleman and Dave Douglas. The explosiveness of the improvisational explorations and the richness of the harmonies certainly make those comparisons more than viable.

What makes the pianoless jazz quartet such a compelling format is that each member depends on the ensemble’s unanimity in order to be musically articulate. A non-musical corollary might be contact improvisation in dance, where consciousness of one’s own movement and the ensemble’s collective movement are dependent on physical proximity.

The music on this record was penned with confidence and an astute understanding of how to facilitate improvisation. Bates has, in the past,

referenced verbally the influence of composers like Prokofiev and Shostakovich and the deftly-executed rhythmic complexity and modest use of austere neoclassical harmony also calls to mind “Soldier’s Tale” and “Octet”-era Stravinsky, with a generous infusion of the type of rollicking intensity that sets jazz apart from most music composed for the concert hall.

In performance, the rhythmic intrigue of “Bloodletting” stood out, beginning with sputtering trumpet that gave way unexpectedly to a particularly vigorous tenor solo from saxophonist Quinsin Nachoff. “The Russian School” and “Machinery” both put the group’s supple transitions and shifty

maneuvers in the fore, with drastic changes in tempo and intensity providing plenty of peaks and valleys.

The musicianship on display throughout the Cornelia performance and the new record itself cannot be undervalued. Drummer Jeff Davis contributes both delicacy and brute force, reacting instantaneously to the constant changes in direction and mood. Davis and Bates together form a highly effective rhythm section, providing forward motion, effusive support or unpredictability. Nachoff and trumpeter Russ Johnson play together quite wonderfully, updating the intuitive cohesiveness that distinguished notable jazz frontlines like Eric Dolphy and Booker Little or even Chet Baker and Gerry Mulligan. Outside Sources is a formidable ensemble that benefits from the excellent compositions and passionate, dedicated first-rate musicianship from the whole band.