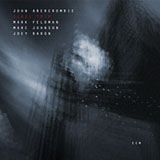 Guitarist John Abercrombie's last record, 2002's Cat 'n' Mouse , as good as it was, was as much an announcement, a promise, a consolidation and move in a new direction that was hinted at by 1999's Open Land. Signalling the arrival of a new quartet featuring violinist Mark Feldman, bassist Marc Johnson and drummer Joey Baron, Abercrombie moved in a freer direction, where he upped the ante for group interplay. His latest quartet release, Class Trip , delivers on that promise with an album that raises the bar even further, and never fails to make the leap.

Abercrombie's definition of free music may not coincide with most. There is, for the most part, structure to be found here, both harmonic and rhythmic. And even when there is none, as on the two group pieces, "Illnoise" and "Epilogue," it feels like they are building one out of nothing. More spontaneous composition than free-for-all, this is free music with a concept, with a purpose; four adventurous improvisers who are capable of liberating the barest sketch of an idea.

Abercrombie's roadmaps provide a modicum of direction, but it is where the group takes them that is the real magic. "Dansir" is based around a simple melodic structure, a rallying point for the group; improvising freely over a pedal tone, the structure is a point of reference that is returned to seemingly spontaneously. Indicative of Abercrombie's writing style throughout the album, simple motifs provide a place from which to come and go, imposing a lyrical compositional compass that gives each piece a centre not usually found in free improvisation.

The group's idea of chamber jazz still leaves room for energy, and there are more moments of pure fire than on Cat 'n' Mouse ; but they are most often part of a larger whole, pieces that exude invention and contrast. And while the quartet approaches the material with a certain elan and sense of ambiguity, there is an elegance in their approach that keeps them accessible throughout.

Abercrombie has long had a penchant for 3/4 time, and there is no shortage of it on Class Trip , from the introspective "Risky Business" to the more intense "Descending Grace." But whether they are exploring the possibilities of waltz time on the playful "Cat Walk" or the alternating time signatures of the delicate title track, what makes this a remarkable record is the sheer inventiveness of the group and their ability to turn on a dime. The interaction between Abercrombie and Baron is especially noteworthy, as each seems to be an extension of the other.

There are many artists who perform free music and a smaller subset who subscribe to the concept of spontaneous composition; but few manage to straddle the line between imposed structure and loose exploration as successfully as Abercrombie's current quartet. Class Trip manages to create much out of very little; imaginative and substantive, this is arguably the best group of Abercrombie's career.