The Remote Viewers: City Of Nets

BY ALEX FRANQUELLI
September 13, 2012
Sign in to view read count 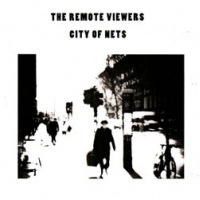 From A to B. The language spoken by The Remote Viewers is one that feeds itself with the interferences caused by lines crossing each other at various speeds in a continuous effort to connect the dots. We, the humans, are the thriving beads forever longing that 'B' we, sometimes, don't even want to reach. City of Nets is a beautiful picture of a random post-industrial environment, of its contradictions and its organized chaos moving at the pace of our routine: boring, static and grey but ever-changing, nonetheless.

If you are amongst the ones who have appreciated The Remote Viewers' previous efforts Nerve Cure (2011) and To The North (2010), you are undoubtedly familiar with the unwritten set of rules, which seem to discipline the structure and the complex organization of their music. The atonal approach relies on a minimal (some may say "austere") take on angular, jagged composition, which reflects the overarching cinematographic feeling.

The saxophones remain in the foreground dictating the melodic line, setting the pace by toying with frenetic juxtapositions and audacious dissonances, leading the band when it ventures into the dark, dodgy corners of the city ("The Wiring Party" and "The Night Desk") dragging the piano and the percussion with them.

Not a single note on City Of Nets is a consequence of a natural, inhuman act or will: in the city everything is moved by humans and so is the clamor and the reassuring violence of every day's disharmony. Repetition is therefore a statement reasserting the comforting predictability of our bustling urban environment and the feeling is fully expressed by "Red test"—and the overall atmosphere.

When it comes to describing The Remote Viewers, avant-gardism is not an end, but rather a means to convey the imaginary scenes the music is at pains to describe. Tunes like "Strange Welcome" or "The Wiring Party" are not only an experiment in musical metaphysics, with their diluted pace and whispered musicality: they are an involuntary mockery of musique concrète. The percussions play an integral part in this as they highlight the organic feel of the rhythm that otherwise relies entirely on drum programming.

City of Nets is jazz, not in its purest form and if we really would like to label it, we could even say that its appeal lies in the post-modern take on vintage jazz such as bebop. In this, we wouldn't be too far from the truth. What Adrian Northover and David Petts are trying to achieve is there for the taking, but it needs to be learned and captured through an attentive and repeated listen. The music allows enormous amounts of freedom and that is probably one of the reasons albums like these, with their atonal structures and rawness, will not appeal to everyone—at least not at first. If you live in a city—any big city—you already know this album and you love it. Or hate it with a passion.