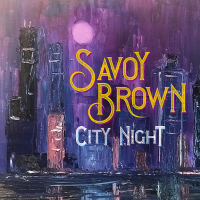 Savoy Brown's City Night is a declarative return to the blues after the group digressed into more rock-oriented territory on Witchy Feelin' (Ruf Records, 2017). As a result, this album under the aegis of founder and titular leader Kim Simmonds has more in common with The Devil to Pay (Ruf Records, 2015), an equally uncompromising tribute to his roots.

As on the previous album, the once and future Savoy Brown bandleader does continues to half-mumble like Dire Straits' Mark Knopfler on this album's opener, "Walking on Hot Stones," but his caustic guitar work, including some lethal slide, takes precedence, as it should. A similar phenomenon occurs on "Superstitious Woman," except that the Simmonds' vocal resembles that of John Fogerty in the early days of Creedence Clearwater Revival. The easy lyric rhymes were no doubt irresistible on that quasi-shuffle and similar thinking no doubt accounts for the other borderline cliché titles like "Wearing Thin" and "Red Light Mama." But such nagging second thoughts disappear early in the boogie of "Ain't Gonna Worry" and through its double-time denouement.

A stylist par excellence, Kim Simmonds has never been an innovator with any of the multiple lineups of Savoy Brown and his work with bassist Pat DeSalvo and drummer Garnet Grimm is hardly an exception. Nevertheless, this sturdy rhythm section remains steadfast and avoids plodding (if only just barely) on tunes like "Don't Hang Me Out to Dry," while the pair's playing on "Payback Time" rises to the energetic and stylish level of the guitarist/composer's. The trio swings together, albeit with just a bare modicum of panache, but there's no denying how earnest is their no-frills approach.

Kim Simmonds clearly elevates the musicianship of his accompanists, and while he might be faulted for not allowing them to challenge him, he's clearly more interested in continuously digging deeper into the well of contemporary electric blues than exploring new ground. If he sounded at all tired with the enterprise, it'd be one thing, but in both his singing and (especially) his playing, the rousing engagement is undeniable: "Hang In Tough" reinforces the justifiable pride he evinces in the territory he's staked out for himself over the years, and if he proves nothing else with City Night, it's that his work has its self-renewing rewards.

Short of becoming mesmerized by the time "Conjure Rhythm" begins to play, fans of the blues-rock genre (or novices and dilettantes in the process of introduction) will no doubt be compelled to hike the volume, a move that can only accentuate how cleanly Ben Elliott recorded, mixed and mastered these dozen original (sic) songs of Simmonds (who also produced the album at Showplace Studios in Dover, New JerseyJ). The resulting clarity and punch increases the impact of the abandon in the musicianship within the titletune—especially the crash and splash of the cymbals— and in the course of an obviously Bo Diddley-derived "Hang Tough," where the dual distortion on the guitar washes back and forth in the speakers (or headphones).

"Neighborhood Blues" suggests the technical expertise on display for this record might, in fact, be the primary distinction between this configuration of Savoy Brown and (most all) its predecessors. That is, of course, apart from the personnel which, having played together now for a decade, display immediately-recognizable, mutually intuitive empathy, on "Selfish World" and Wearing Thin," among other numbers, that the unit transcends fad and fashion. Savoy Brown should be rightfully regarded as an institution and, City Night does justice to the legacy Kim Simmonds begat some half-century ago.