By Edward Blanco
March 8, 2013
Sign in to view read count 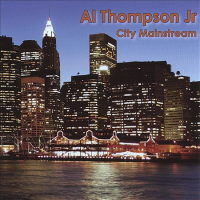 Known for favoring bebop as well as jazz standards from the Great American Song Book, Bridgeport, Connecticut-based jazz pianist/composer Al Thompson Jr. delivers his first album as leader presenting a set of nine original straight ahead compositions recorded with a combination of groups from a quintet to a light ensemble—all nicely packaged on City Mainstream. Don't be deceived by the art work cover, the name of the album or the "city" theme of the disc, as the terrific music encountered here is not a product of the big city scene. In fact, all of the music was recorded in the small Connecticut towns of Bridgeport, New Haven and West Haven, with a total combined population that would still fall short of the amount of residents living in the smallest borough of New York City. Needless to say, Thompson's groups could have performed anywhere, if they wanted to leave a big city impression with their muscular sound, they certainly succeeded.

Two people instrumental to the realization of this recording are friend Calvin Thomas who co-wrote four of the original compositions, and producer/arranger Drake Smith who also lends his talents on the trombone and piano. The first sextet does the honors on five of the pieces beginning with "The Chase" followed by the romantic "Memories of a Moonlit Night" featuring David Childs string-like synthesizer behind tenor saxophonist Kris Jensen, who provides a beautiful warm-toned solo lead making this tune a highlight of the album. The up tempo lively title track documents the only appearance of the largest (eight-piece ensemble) cast showcasing the additional instrumental voices of the flugelhorn, guitar and tambourine.

One of the bright moments invoking images of a bustling crowd walking briskly on a downtown Manhattan side walk, comes from the fast-paced "From The Beginning." The two quintet formats here find Thompson and Thomas joining forces on their original (co-written) "A Man In Love," and on "The Charge" where the friends share duties with the keyboards. Saxophonist Jensen takes much of the center stage on the soaring, almost funky-like "High Speed The Ride" revealing a change in direction and texture from the majority of the session.

The music comes to a delightful climax on the two last pieces where the first sextet polishes off a gorgeous melody on "One Town One People" only to be eclipsed by the other sextet combo performing the seven and a half-minute mainstream closer "8th Avenue Safari" in a live setting. Bringing a variety of influences to the session, Al Thompson Jr. wanted to evoke images of a city in perpetual motion and whether that comes across here with this music, is uncertain. What is clear however, are the challenging Thompson compositions of City Mainstream shinning bright big city lights on an album well worth illuminating.

The Chase; Memories of a Moonlit Night; City Mainstream; A Man In Love; From The Beginning; The Charge; High Speed The Ride; One Town One People; 8th Avenue Safari.