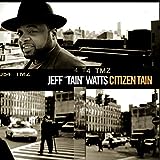 As one of the most visible drummers of his generation, Tonight Show rhythm man Jeff "Tain" Watts was not going to bring his own compositions out with just anyone! So, he joined forces with old band mate (and Leno connector) Branford Marsalis (who also produced the album). Watts also reunited the sax-y Marsalis with his horn- er- trumpet-playing/Pulitzer Prize-winning brother Wynton and li'l bro Delfeayo (who also had a percussive hand in the production). Together with pianist/arranger/dearly departed friend Kenny Krikland and bassists Reginald Veal and Eric Revis, Watts debuts his stunning stick work with a decalogue of original skin games.

Opening with "The Impaler" (whose only real relation to its title is a stake-driving pre-recapitualtive solo and an ired vamp made famous by the Ohio Players), Tain avoids going from Vlad to Hearst through the tale of "Muphkin Man," a rhythmic cat far cooler than Rosebud's owner could ever be. Though it is ocassionally difficult to discern who is the cap-Tain of the musical ship, Jeff takes the floor mightily in such offerings as "Attainment," "Trieste" and the "Silent Night/6 O'Clock News"-y "MLK Shake-Up Call," a turbulent tribute to Dr. King and the victims of the 1994 Northridge earthquake. From tributes to lost heroes and reworkings of older compositions to a final multi-layered/multi-influenced musical conversation, Watts and friends cover many bases in this ten inning game. Though some of his solos get a bit noisy and unwieldly, Tain's strong and subtle support of his talented bandmates shows him to be a well-positioned bandleader who does not need the help of a late night comic to get the audience involved.