By Bruce Lindsay
November 28, 2014
Sign in to view read count 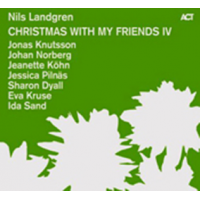 Christmas is a time for tradition—turkey, mistletoe, reindeer, plum pudding. Since 2006 another fine tradition has been insinuating itself into the Christmases of jazz lovers—the Nils Landgren Christmas With My Friends album. The Swedish trombonist, singer and bandleader is now on volume IV. Packaged in bright, shiny, green and silver, it's a mix of old and new, familiar and unfamiliar. Every track, with a couple of notable exceptions, is a holiday-themed joy and even the exceptions seem, in Landgren's hands, to have been waiting for their chance to burst upon the holiday season.

Unlike volume III, recorded at live concerts, Christmas With My Friends IV is a studio album (the album sleeve gives the recording dates as December 17-19 2014 but as the review copy arrived in November 2014 let's assume that the dates were actually in 2013).

Landgren's friends are the same group of seven that's appeared on previous albums in the series. The full line-up only appears on three songs: most of the tracks are performed by smaller combos. Johan Norberg's "Icicles," which he performs solo on the kantele (a Finnish instrument akin to the dulcimer), is a sweet and pretty tune, evoking the chill of winter but also the emotional warmth of Christmas. The duo of Ida Sand and Norberg perform the evocative "In The Bleak Midwinter," Sand adding glockenspiel to Norberg's acoustic guitar.

Odetta's "If Anybody Ask You" brings a touch of gospel to the proceedings. Sharon Dyall sings and adds punchy harmonica, Eva Kruse's swinging bass drives the rhythm. Kruse is also at the heart of a swinging, funky "Santa Claus Is Coming To Town"—an instrumental duet with Landgren's trombone. "The First Noel," "O Helga Natt" and "O Du Saliga / O Du Fröhliche"—the three songs which feature all eight performers—are notable for the beautiful blend of voices and for the saxophone playing of the relatively under-used Jonas Knuttson.

The exceptions to the general rule work in this context because Landgren and friends give something of a makeover to them both. The message of "What A Wonderful World" fits the Christmas spirit even if references to rainbows, blue skies and green trees aren't so traditional. Jessica Pilnas sings beautifully, Norberg plays out a 2/4 rhythm on his acoustic guitar and Landgren's throaty trombone gives it an extra spark. George Michael's "Last Christmas," on the other hand, mentions Christmas repeatedly but the narrative of a broken love affair is off-topic. Landgren's fragile, delicate, vocal—accompanied once again by the excellent Norberg—highlights the sadness and the hopefulness of the lyric.

Christmas With My Friends IV is an intimate, beautiful, collection of traditional, religious and popular Christmas songs. Landgren shows no sign of running out of material and Volume V will hopefully arrive in the near future—what are the chances of a Landgren and Friends version of "Fairytale Of New York"?