By C. MICHAEL BAILEY
December 4, 2016
Sign in to view read count
Jazz vocalist Kurt Elling says of the holidays, "In the Western world, whether you're Christian or not, Christmas has some kind of seasonal relevance to you...You really cannot escape the holiday—even if it is just coming at you on television...for me, the holiday comes enriched with a lot of beautiful personal memories. It also comes freighted with the knowledge that millions of other people would carry their own such memories; and not all those memories are of happy occasions."

Memory is an essence of Christmas, an experience that is filled with history and resonance. This is never more true that in the more contemporary and secular celebration of the holiday. The Hope of the message is always present in the memory. 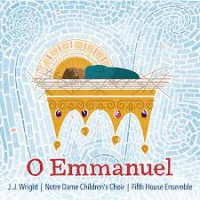 For capturing the sheer warmth, wonder, and innocence of Christmas, pianist, composer, and conductor JJ Wright's suite O Emmanuel is a great place to take refuge. Wright shoots a musical arrow through history, picking up the ancient texts of "O Antiphons" and blending them with plainchant, hymnody, and jazz improvisation. Wright introduces his suite with the traditional "Gabriel's Message," sung with the conviction and innocence of the Notre Dame Children's Choir. A diamond in the rough, Wright polishes both his nine-part suite and the chorus to a bold and bright shine. He intertwines the familiar with the new, most notably taking Michael Pretorius's ancient melody, "Es ist ein Ros entsprungen" and weaving it into his "Radix." Wright carefully reharmonizes "Veni, Veni, Emmanuel" into his beautifully rendered "Emmanuel." The suite ends powerfully with "When the Sun Rises in the Morning Sky" and the closing antiphon, "Christ the Lord is Born Today." O Emmanuel is very much a collaborative effort between Wright, the Notre Dame Children's Choir, the versatile and rugged Fifth House Ensemble, the latter who has pioneered the use of multimedia in their performance. This release is a celebration, in its most basic form, of the Christmas Season in the 21st Century. 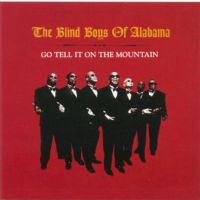 Omnivore Records recently resurrected two early 21st Century recordings of the Blind Boys of Alabama, Spirit of the Century (2016) and Higher Ground (2016), originally released on Real World Records, to considerable acclaim. Omnivore now brings forth the vocal group's Christmas offering, Go Tell It on the Mountain. Originally released in 2003, the collection includes the group with various contemporary artists, including Solomon Burke, Tom Waits, Mavis Staples and Shelby Lynn. Produced for its obvious commercial appeal, Go Tell It on the Mountain outshines its more venal intentions to set the holiday corpus on its ear with performances melding blues, gospel, country, R&B, and contemporary genre into a potent and powerful statement celebrating the long-lived group's Christian vision. That said, this recording is a mixed bag of good intentions, some paying off and others not. The album opener, "Last Month of the Year" is a contemporary Gospel cooker fueled by John Medeski's Hamond BE and Duke Robillard's creole guitar. Things hit on all cylinders here. The best contemporary interpretation is Solomon Burke singing Harry Connick, Jr.'s "I Pray on Christmas," all full of Saturday night juke joint and Sunday morning service. This is something refreshingly different for Christmas.

Even those songs that do not work for me here: Tom Waits on the title song, George Clinton on a blues-saturated "Away in the Manger," and the great Les McCann's "White Christmas" all possess an organicity missing from other banal contemporary holiday offerings. What they are is Honest and I will put that up against every Trans-Siberian Orchestra seasonal emission released. Hell, the best song on the collection, Chrissie Hynde singing "In the Bleak Midwinter," (the complete Anglophilic carol, words by English poet Christina Rosetti, music by Gustav Holstz) has absolutely no business on this recording. However, it sports some of Richard Thompson's best guitar playing ever. The Blind Boys of Alabama are never bettered than with no "special guests," as evidenced on their searing blues stigmata of a "Silent Night" featuring their very own Clarence Fountain, propelled by Danny Thompson's fat double bass. Come to think of it, there is absolutely nothing wrong with this recording. It all works just fine. 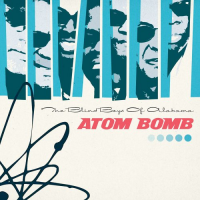 And, no, this is not a holiday recording. It is a Blind Boys of Alabama recording re-released with Go Tell It on the Mountain, previously released on Real World Records. Christmas is about Western Christian Tradition as is the group's 2005 release, Atom Bomb, restored here by Omnivore Records. This disc bears the conception of all of the Omnivore releases, casting this timeless chorus in a more contemporary light. The group has largely resisted such efforts, but when they do step out of their comfort zone, the result is "(Jesus Hits Like the) Atom Bomb" with the group appropriately backed by only bass and drums. Bill Withers "Demon" features Billy Preston on organ and piano (in one of his final recordings, jettisoned by the guitar of Los Lobos' David Hildago. Here, the interpolation of Hip Hop into an older form almost reaches perfection. This is something very special. Hildago's molten guitar transforms Norman Greenbaum's sappy 1969 "Spirit in the Sky." Charlie Musselwhite plays the same role here as Richard Thompson's unusually sublime presence on the previous recording. Eric Clapton's "In the Presence of the Lord" receives its proper love from Clarence Fountain with Preston providing his best playing on the record. I believe that the holiday season is hard, often impenetrably so. This. This music...can transcend this. This is so good, you can barely stand to listen to it. 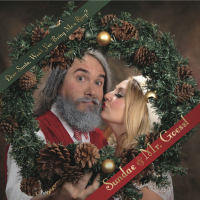 Sundae and Mr. Goessl
Dear Santa, Won't You Bring Me A Ring
Self Released
2016

Right on the heels of their superb Make My Heart Sway (Self Produced, 2016), vocalist Kate Voss and guitarist Jason Goessl, AKA, Sundae & Mr. Goessl, release the delightful Dear Santa, Won't You Bring Me A Ring, whose charm lies in its staggeringly courageous disregard for the traditional holiday canon, focusing on much more recently composed fare performed in their own imitable retro way. These are contemporary songs rendered with a 1920s-'30s flavor. "Mr. Santa" is a smartly constructed kiss-off of the Chordette's 1958 hit "Mister Sandman." Voss is beautifully coy and coquettish, while Goessl does not miss a beat. Vince Guaraldi's 20th Century classic, "Christmas Time is Here" offers the pair the opportunity to do what they do best: transform the familiar into something new, surprising and very welcome. She even makes Elvis Presley's greatest failure, "Blue Christmas" worthwhile with Goessl's certain alternating-thumb playing. The duo does that pre-war popular fare better than anyone and prove it on Leroy Anderson's "Sleigh Ride," an American Christmas Classic if there ever was one. Frank Loesser's "What are You Doing New Year's Eve" and Irving Berlin's "This Year's Kisses" solidify this position for the pair. A 1950s rendering of "Santa Baby" perfectly ends this fine collection with Voss, purring content. 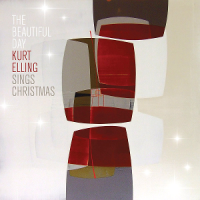 It is a great day, in any art, when concept, theme, arrangement, and performance all intersect. Such is our good fortune on Kurt Elling's bold and spirited The Beautiful Day. As the only possible heir to that place in jazz vocals vacated by Mark Murphy, Elling creates a solid seasonal statement wrapped in genius and creative invention. His triumph is his inspired treatment of Dan Fogelberg's "Same Old Lang Syne" well punctuated by Jim Gailloreto's tart and slippery soprano saxophone. The song almost sounds completely out-of-place until subsequent listenings put it into perspective. It also sets the creative tone of the recording with very contemporary readings of very contemporary compositions. Donny Hathaway's "This Christmas" is so hip it will give you whiplash. Of the traditional carols (and, yes, there are some), Elling turns them all on their ears. "Wenceslaus" is offered in a three part, wordless vocal suite probing the depths of that old melody. Each of the three sections is dramatically different, deepening the harmonic message. Elling's "We Three Kings" features new lyrics by Tori Amos and some challenging soloing by guitarist John McClean. From a technical angle, Elling's fine band hits its rhythmic nirvana in the release just prior to Stuart Mindeman's two-fisted piano solo in the Clark Sommers arranged "Christmas Children." This is what author Ted Gioia would call that "thing" separating the novices from the experts. A simple transition that amps up everything. It is in its sheer creativity that Elling's The Beautiful Day captures the hope and celebration to be found in Christmas.