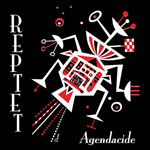 Remember in the high school band room, how the horn section would goof around like they were part of Parliament Funkadelic or James Brown or the Mothers of Invention? The super cool Mothers, with Napoleon Murphy Brock on sax, flute and vocals. And then the drums, all of them, would join in. Think if that horn section was actually as together and inventive as it thought it was, and bassist Bootsy Collins was in the neighborhood and dropped in to jam. And the Specials, Selecter and Madness, all of them including trumpeter Chas Smith showed up and then Zappa himself made an appearance on guitar midway through the jam, with Sun Ra in tow as things take a decidedly fishy turn. Think all that and more and then you sort of have the feel of Reptet, as Grand Wazoo (FZ/Ryko, 1972) is turned into Gwand Wabbit.

A Seattle sextet, Reptet mixes it all up and draws from a variety of styles including jazz, funk, world, Latin, ska, avant-garde, Zappa and silliness. This, their second CD, uses the '70s with its funky attitude, punky-ska irreverence and ultra cool LP-like packaging as something of a touchstone, while answering the age-old limited option reception question Chicken or Beef?. The answer is, of course, "I'll have both please, with pork BBQ, fish and veal as well." No veggie option here.

John Ewing plays drums and assorted other things and he with bassist Tim Carey are stellar in providing not only a solid rhythmic floor but in setting direction to what could have easily developed into total silliness. But this is really good music. Samantha Boshnack plays trumpet and writes most of it and she can scream or play it sweet. She can go from Latin to Jamaican to her own thing without catching her breath. Chris Credit is on all sorts of saxophones and Nelson Bell's t-bone and tubas with Izaak Mills' tenor sax make for incredibly tight and swinging horn playing. If you need more Reptet—and who wouldn't—their 7" vinyl single (very red vinyl in fact, with MP3s available for download with code), "Agendacide b/w Snow Leopard X 3," includes organist Wayne Horvitz and prepared guitarist Mark Oi. It looks so neat on my turntable and sounds even better. Reptet=horns + bass + drums + attitude.