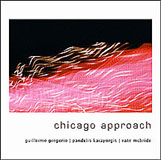 The obvious precedent for any trio consisting of clarinet, piano and bass is the group that clarinetist Jimmy Giuffre once had with pianist Paul Bley and bassist Steve Swallow. But once that point has been made it serves no purpose in the discussion of this music, which is work that has to be dealt with on its own terms. And not least because of Guillermo Gregorio's clarinet playing, which is unlike anything in the jazz canon, and it's far more expansive than Giuffre's ever was in this setting.

To place undue focus on any of the musicians individually is however somewhat misleading. This is music as three-way conversation, and the democracy that this suggests puts it profoundly at odds with so much of the stuff that's out there.

The effect of this is bracing. On "Space Modulator the group ambience is so wide open, and this despite the overt formality that seems to pervade the music. The effect is that of a trio in a perpetual state of restless probing.

The odd balance of the group, something which is of course a direct consequence of the demands of the music they're performing, is such that it often seems as if Nate McBride on bass is covering the most ground. This is especially true on the title track, where the wide-open space between filigreed clarinet and piano lines is alternately filled or left open. In a sense, the sheer unpredictability of the bass, in this instance, undermines what might be called a point of conventional reference. The listener is left with no doubt about how rarefied the space the group occupies is.

More or less the same thing is true of "Catalpa, but the less than three minutes the track takes to perform is the only instance where the duration seems somehow wrong. Brevity ensures that the intrigue the piece signals perhaps isn't resolved in any meaningful sense, and the fact that Gregorio sounds like nothing other than a post-modern Pee Wee Russell just adds to the sense of frustration.

Having said that, the even briefer "Lake Michigan Cues is to all intents and purposes the perfect miniature; to be able to put such a variety of mood and feelings in less than two minutes is no small achievement.

This is music that's ultimately as singular as anything out there. The fact that it passes the test of repeated listening with such flying colors is only to be celebrated, and even though there's something to be said for the assertion that it's both dark and cold, it doesn't alter the fact that the players are tapping some deeper, more fundamental truth.