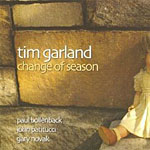 Following two critically-acclaimed recordings with his Storms/Nocturnes trio, British woodwind player Tim Garland felt like a change. Rather than continue to pursue the more extended compositional form of Storms/Nocturnes (Sirocco, '01) and Rising Tide (Sirocco, '03), Garland wanted to return to more of a song form, and with a more conventional lineup. And while the compositions on Change of Season are less complex than those performed by the chamber-like yet rhythmically vivacious Storms/Nocturnes trio, they are no less challenging in other ways. Since his emergence on the international scene as part of Chick Corea's Origin band, Garland has been creating a stir not only as a fine player with a distinctive voice, but also as a composer of note with a personal vernacular that is instantly recognizable, regardless of the context.

Opting for a powerful four-piece featuring bassist John Patitucci and drummer Gary Novak, also the fire and pulse behind Joe Locke's recent Four Walls of Freedom band— Four Walls of Freedom (Sirocco, '03) and Dear Life (Sirocco, '04)—Garland's new album also features guitarist Paul Bollenback, who, like Vic Juris and Dave Stryker, is well-known to musicians but who has curiously not made the leap into the wider listening public's perception. Hopefully Change of Season will help rectify that, as he is a consistently versatile guitarist, equally comfortable playing acoustic guitar on "Break in the Weather," which sounds a little like where Ralph Towner's Solstice band might be had it continued to this day, as he is on electric on the more soulful "The Food of Love," where he demonstrates a relaxed and bluesy style. Bollenback also uses guitar synth tastefully—a feat in itself—layering light washes to thicken the texture at times, doubling his guitar tone at others.

Garland is one of those frightening players who seem equally comfortable on all instruments. Whether he is playing bass clarinet on the slow-burning Coltrane composition "Tunji," tenor on the lightly funky "Crawler," or soprano on "Piece in Our Time" which, with Bollenback's acoustic guitar, once again demonstrates Garland's roots in the writing of Towner while, at the same time, asserting his own voice involving a distinctive harmonic élan, Garland makes each instrument sound like his primary.

The overall complexion of the recording is that of an open, loose blowing session, albeit over material that is never less than a challenge for all the players. There's a certain fusion-like energy, but the instrumentation, the more organic approach and an utter lack of the instrumental bombast that is, sadly, so often representative of the genre, makes for a more compelling experience. Patitucci in particular, who first gained his reputation in the fusion arena with Chick Corea's Elektric Band, is a far more mature player these days.

Change of Season charts Garland's continued growth as an artist, demonstrating his evolution as a musician with a unique vision that supersedes setting. A formidable player and an irresistibly lyrical writer, Garland remains at the forefront of bandleaders to be watched.

Visit Tim Garland on the web.

Brak in the Weather; Tunji; Crawler; The Food of Love; Piece in Our Time; To a Discarded Doll; Inner Space; Change of Season; Electrocity; First Rain.