By JOHN SHARPE
December 1, 2017
Sign in to view read count 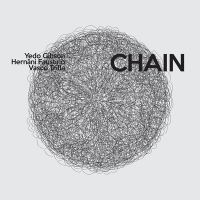 Gibson became enamored of free improvisation in his native Sao Paulo, but unable to find sufficient collaborators, moved to Europe, where he participates in a wide range of genres. On soprano he brings to mind Steve Lacy (a common tale for aficionados of the straight horn), especially on the opener "Mesh" which begins with his repetitive gradually mutating phrases over restless accompaniment. On baritone he calls on an expressive language of plosives detonations, falsetto squeaks and discontinuous juddering blurts, and even blows both reeds together briefly later on "Mesh."

ADVERTISEMENT
Gibson occasionally crosses the porous border into free jazz, where the instruments lean closer to their traditional roles. That's the case briefly on "Lock" where after a spare atmospheric start his baritone, with Faustino in almost walking counterpoint, slides into ballad territory, before transmuting via Trilla's tolling cymbals back to the initial gambit. And even more so in the increasingly anthemic "Tooth," where Gibson's raucous baritone hollers recall Mats Gustafsson. While his switch to soprano dissipates the impetus slightly, both Faustino and Trilla seem comfortable with the roiling excitement, stoked by the bassist's reiterated arco figure.

Elsewhere Faustino contributes different colors to the ensembles as much as momentum. Trilla adds a light airy presence, often concentrating on tappy percussion and cymbals. As the music evolves it reveals varying combinations of both sound and mood. "Axis" melds passages of nervous energy with timbral explorations assembled from abrupt string snaps, booming finger rubs and echoey whooshing. Like his confreres Gibson constantly seeks novel textures, some more engaging than others, but the trio's quest is never less than commendable.