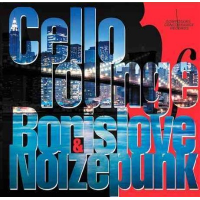 There are so few composers of contemporary music who have expanded its idiom and its language that they can be counted on the fingers of one hand. Among those few, the shape-shifting guitarist/electronics manipulator Gene Pritsker is one of the only composers who continues to break down the barriers that still exist in the sometimes water-tight compartments that industry marketers revel in. On Cello Lounge, with the equally fearless cellist Borislav Strulev, the iconoclast in Pritsker once more comes to the fore. Here, like on several Bill Laswell albums, Pritsker melds and mashes a myriad idioms and invites cultures to collide: Hindustani vocal with Hip-hop, Carnatic with bluegrass; baroque and rococo with modern atonal music and lounge with everything else. If a mish-mash is the expected result, perish the thought. There is not a dull moment on this duo album.

The reason for this exciting musical sojourn is that both Strulev and Pritsker are continuously inventive. The cellist is like an itinerant traveler sweeping across the landscape of his instrument. His left hand is a constant source of magic and it trembles and slides like it has a mind of its own. It travels up and down the strings with absolute abandon; yet it is in complete control and guides the bow in his right hand as it glides across the strings. That right hand seems completely apart from the rest of Strulev's body, causing his bow to become a magical wand that waves and weaves its way across the taut strings. All this time Pritsker is restless. His guitar twangs and sings in counterpoint. Guided by the electronic beats Pritsker weeps and wails as he traverses miles across the musical landscape. His fuzz box is hyper-active; wah-wah pedals interject warbling effects in the eclectic compositions that skitter and swirl from hip-hop to swing and to the polyrhythms of Indian ragas.

Some might posit that the music remains within the elements of the tonic scale and therefore does not go too far in creativity. But there lies the challenge and it is here that Pritsker and Strulev shine with special ingenuity. It takes a very inspired type of creativity to innovate with a constrained space and while the lounge might exist in a spectral space outside the known three dimensions of the music, it also is reflected in what seems like a mirror that lets in the fourth dimension—that of a kind of irrepressible cubist echo that turns even the simplest lines and phrases into something truly spiritual and otherworldly. Strulev's outstanding arco and pizzicato work is set against a caterwauling lyric vocalist that seems to come from another universe on "Akoola," a brilliantly crafted chart in this vein.

Innovation is rife among the written passages and, although cadenzas are not indicated in the score, there is ample room to be creative, which is something for which both musicians show a true penchant.