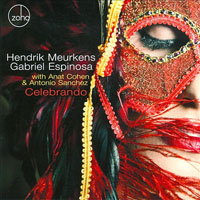 Defining the Zoho imprint as a "World Music" label is a bit of a misnomer, but label head Joachim "Jochen" Becker does seem to have a global outlook when it comes to artist signings. Afro-Cuban music, British blues, Argentine sounds, R&B, Asian-jazz hybrids, Brazilian jazz, and vocal projects have all found a home at Zoho. Some labels like to hone in on a specific style, but Zoho seems to feel the opposite; their only guiding principle of discrimination seems to be based around quality.

While the label is still a year-and-a-half from celebrating its tenth anniversary, it has reached a major milestone with Celebrando. This album marks the hundredth release on Zoho Music, and reflects the worldly tastes of the label and its founder. A German harmonica ace, a Mexican bassist, an Israeli reedstress, an American trumpeter and a Russian pianist, along with a few other topnotch players, come together to create a Brazilian-based program that's full of life and spirit.

Harmonica maestro Hendrik Meurkens and bassist Gabriel Espinosa share top billing, but the music seems to mark this as a Meurkens date. While each man contributes four songs to the program, Meurkens' harmonica is the guiding voice while Espinosa supports more than stands out. Regardless, both men can be credited for putting together a program that's buoyant and pleasing to the ear.

Meurkens and Espinosa seem to share an interest in blending voices that rarely encounter one another. Harmonica, clarinet, wordless vocals—courtesy of the enchanting Alison Wedding—and flugelhorn move as one (or dovetail with one another) in various permutations throughout this album. While all of the music has a distinctly Brazilian identity, each track has individual, distinguishing characteristics. Pianist Misha Tsiganov's Fender Rhodes brings a different color to "La Esperanza," Anat Cohen's peppy clarinet work enlivens "Frenelosa (Choro No. 2)" and Espinosa's Spanish vocals on "La Puerta" give him an opportunity to step out of the shadows and into the spotlight.

While Cohen gets special billing because of her star power, trumpeter Jim Seeley is even more important in the grand scheme of this project. His warm flugelhorn is featured well, and he steals the show with his muted trumpet solo on the samba-leaning "She Lives In Brazil." The undercarriage of the band proves to be equally important as either Antonio Sanchez or Mauricio Zottarelli drive the band through this music.

Celebrando is worth savoring for the music, but it's also a worthy salute to Becker, who has turned Zoho into a major player in the world of jazz and beyond.