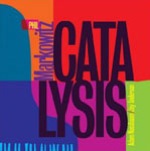 With so many artists striving for attention, it's often easy to overlook those who have devoted their lives to music, known amongst musician circles as players of great depth while remaining largely below the radar. His discography as a leader may be small, but Phil Markowitz has, for the past three decades, been the pianist of choice for more visible artists including saxophonist David Liebman—in whose group he worked for a decade, collaborating on the dark-hued and pensive duet disc Manhattan Dialogues (Zoho, 2005) and, as part of the tenor trifecta Saxophone Summit, releasing Seraphic Light (Telarc, 2008)—and Yellowjackets saxophonist Bob Mintzer, heard most recently on In the Moment (Art of Life, 2007). Catalysis, Markowitz's first date as a leader since 1998, is a trio record that amply proves why he's so in-demand, and transcends preconceptions about what this sometimes over-worked format can and cannot be.

Over the course of eight original compositions, Markowitz leans towards a cerebral, impressionistic style that contrasts with another undervalued pianist, Marc Copland, in his ability to burn harder and with greater extroversion when necessary—another reason why he works so well with Liebman. With bassist Jay Anderson and drummer Adam Nussbaum onboard—two more players who've racked up countless sessions and tours, yet remain mysteriously lesser known—Markowitz has a flexible trio capable of navigating "Undercurrents," which references its title by fluidly traversing a broad range of styles while demonstrating an organic ebb and flow. Complex, yet never for its own sake, the song's transitions are so seamless as to be nearly invisible, with Nussbaum crossing over from mid-tempo swing to high velocity turbulence, near-funk and shuffle, only to return to ambling swing as Markowitz's lengthy head opens up. Markowitz's solo evolves over a similarly shifting landscape anchored by Anderson, its constant twists and turns as seemingly unpredictable as the undercurrents to which it references; though the trio's effortless movements make clear that this is anything but unplanned.

"Waiting," Catalysis' other lengthy track at nearly 12 minutes, demonstrates Markowitz's ability to go long without ever overstaying his welcome. A solo piano opening treads the line between ethereal abstraction and a dramatic introduction of the theme and ambience of the piece; but when Anderson and Nussbaum enter after Markowitz's intro fades to black, it becomes a lyrical but harmonically dark ballad that moves in and out of time. Markowitz shares the melody with Anderson, whose solo is one of economical perfection.

Catalysis may be categorized as a mainstream disc, and its roots in the tradition are clear—albeit in the broadest possible terms. Still, when Markowitz, Anderson and Nussbaum pack what they do into the fiery and acutely interactive title track, any beliefs that mainstream need inherently suggest safe, predictable or unchallenging are quickly forgotten. Markowitz and his constantly risk-taking trio—capable of keeping the interplay at an empathic level while navigating his demanding yet compelling charts—make Catalysis a sure contender for one of the year's best, piano trio or otherwise.