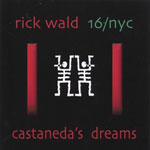 Talk about flying under the radar. Saxophonist Rick Wald has been gigging around New York City for 34 years, and this is the first time I've ever heard his name, much less that of the resourceful big band he leads on Castaneda's Dreams. But if one is known by the company he (or she) keeps, Wald must surely be admired by his peers, as he has persuaded a number of the city's most active and sought-after musicians to become members of his taut but low-profile ensemble.

This is a modern big band in the best sense of the word: precise section work, engaging soloists, a strong rhythmic pulse courtesy of pianist Ted Kooshian, bassist Chip Jackson and drummer Jeff Brillinger. If Wald's seven compositions/arrangements are less than memorable, they are always weighty and provocative—for the ensemble and its audience. This ain't Basie or Herman, but more akin to Maria Schneider or Gil Evans. In other words, Wald gives everyone a lot of meat to chew on. If some of the selections seem to overstay their welcome, that's due in part to the restless nature of today's listeners, who may have important cell-phone and e-mail messages to answer.

Of the seven tracks, all save two—"Coffee with Dolphy, "Breeze Right Through —run for more than ten minutes apiece, with the buoyant, Latin-inflected "Gliding the longest at nearly thirteen. That's actually a good thing, as "Gliding is arguably the most pleasurable of Wald's compositions (I'd have opened instead of closed with it). On three occasions, Wald has the last soloist wailing until almost the final bar, leading one to assume that surely there will be a fade at the end. But no, there's a brief coda and out. This interesting, albeit uncommon device helps prevent one's attention from wandering.

"Dolphy, introduced by Jackson's unaccompanied bass, sounds like something the late saxophonist might have played, even though it's far more structured than his music of preference. The first in a series of rewarding solos are fashioned by trumpeter John Eckert, alto Loren Stillman and baritone Gary Smulyan. "Castaneda's Dreams is an airy samba punctuated by Lou Marini's flute, while "Mixed Clouds and Sun has a dreamy atmosphere in which Kooshian, Stillman, tenor Paul Ostermayer trumpeter Valery Ponomarev and trombonist Art Baron weave delicate patterns.

The pensive mood continues on "Pixilation, whose soloists are Jackson, Smulyan, Marini (soprano) and trombonist Sam Burtis, then slips into a more genial groove on "Breeze Right Through, with Marini (alto), Baron, trumpeter Bob Millikan and tenor Lew Del Gatto sharing center stage. Wald solos only once, with Eckert and trombonist Keith O'Quinn on the atmospheric theme "Over.

Castaneda's Dreams is recommended to anyone who appreciates a contemporary big band with charisma and a cutting edge. The recording quality is first-class, the playing time as generous as it comes. A neat and handsome package.