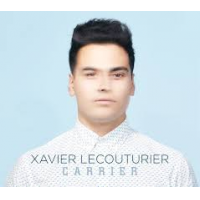 21 year old drummer and composer Xavier Lecouturier seems like he's been around for a while. There is a maturity about his playing one witnesses on the bandstand, a lack of fear of moving and directing flow, of steering time in waves of variance. The fact of the matter is, he hasn't been here long at all, he has just utilized his strand of opportunity wisely while in Seattle. His time outside the classroom saw him at late night jam sessions, getting to know the players on the vibrant Seattle jazz scene. He sought individual tutelage from drummers such as John Bishop, and eventually landed in the drum chair of trumpeter Thomas Marriott's quintet.

Lecouturier met a group of like-minded and talented musicians in Seattle upon his arrival from the Bay area, and forged a musical bond over an extended period of time. Carrier is a collection of compositions forged during this period of rapid self discovery. It encapsulates a time of collective evolution. The tunes allude to a variety of influences both compositionally and spatially, while displaying a deep connection to jazz tradition. While Lecouturier is the primary force on the record both as a musician and composer, there is a definite collective feel to the effort, with guitarist Lucas Winter centrally featured both as the primary provider of melody, and as a composer. Pianist Gus Carns and bassist Ben Feldman contribute compositions as well. All five musicians throughout this recording firmly establish their own personal virtuosity, and ability to utilize it in collective terms.

The opener, "Aube," is a Lecouturier composition, whose melody is carried by Winter and tenor saxophonist Santosh Sharma over the layered harmony of Carns, Feldman and Lecouturier. Winter contributes as a single-note soloist, and colorful counterpoint, firmly establishing himself as a major force on this session.

The title track opens with Carns and Winter stating a melody with a rambling, romantic feel. The two in tandem act as a left and right hand playing lush, full-bodied passages. The long and winding melody perhaps represents the most memorable piece on the record in terms of composition.

Winter's modernist romp "Striations" is where we first hear Sharma lighting up on EWI. It is Winter's solo that becomes central in immediate terms, with rapid fire runs embellished by passages awash in the melody. Sharma is fearless on EWI, dynamically weaving a solo ending in melodic terms in concert with Winter. Carns, as he is throughout this recording, remains tastefully adrift harmonically, shedding light on Winter's stream of consciousness soloing. Lecouturier takes his turn here as well, driving the piece to its conclusion. Even in this driving, forceful tempo, his power, energy, and intricate cymbal work funnels all the energy of the band into workable parts.

"Event Horizon" is a Carns composition with a modern orchestral feel. With solos featuring Feldman, and Sharma, the piece is decidedly less guitar oriented, with Sharma adding some darker, rich tones to the session.

There is a true sense of commonality in terms of composition between the four contributors on this session. Though there are notable differences, particularly in the tunes written by Lecouturier, there is a like-mindedness among them that identifies and bonds these players to a place in time and space. That in itself is the most telltale aspect of this recording, representing an era in Lecouturier's personal evolution both as a composer and drummer. It states the same about all the participants of this session, without regard to where their individual journeys may take them. This recording sets an extraordinary standard for each to live up to down the road. It tells a story of young modern jazz musicians doing things in the most honest way possible. For all these young modernists, tradition and dues paying is not something born in some "old school" version of modern antiquity. They have experienced modern music education while understanding that one learns how to play on the bandstand, not in the classroom. Carrier is not some foundational effort from which to build and foresee a deeper and more creative future. It is a standard to refer to, to be inspired by. It is easy to get the feeling that Lecouturier will more than live up to that standard.