By Kurt Gottschalk
March 9, 2006
Sign in to view read count 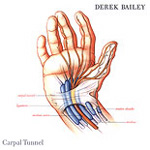 In 1977, suffering complications from a stroke that paralyzed the left side of his body, Rahsaan Roland Kirk made his way to Regent Sound Studios in New York to record what would become his final album, Boogie Woogie String Along For Real. Having long since devised a way to play saxophone with one hand (the technique he used to play three or more at once), Kirk had been able to find a way to play again, despite the limitations of his impairment.

It wasn't his best record, but it's a good one and notable for two reasons. First, Kirk seemingly made it knowing it would be his last. Producer Joel Dorn recounts in the liner notes that Kirk gave details on how he wanted the album packaged after the session was complete and then walked out; Dorn writes that he knew at that moment he'd never see Kirk again. Second, it's not a record filled with grief, melancholy, anger or sorrow. As always, Kirk approached the date with a joyous enthusiasm for what he called "Black Classical Music.

Those same qualities also make Carpal Tunnel, the last recording by Derek Bailey to be released before his death on Christmas Day, 2005, invaluable. Like Boogie Woogie String Along, it doesn't show the guitarist at his best. Still, it's not only his final but quite literally his ultimate release. Like Kirk, for his last recording Bailey didn't back away from that to which he'd committed his life—not jazz in his case but free improvisation, a distinction he spent much of his life emphasizing. He doesn't try to create a pathos, at least not one that wasn't always in his work. It is, as to be expected, a visceral, textural exploration of the guitar.

Bailey does something on the record that Kirk didn't, however. He lets the listener in on his condition. The opening track, "Explanation and Thanks, is an audio letter to a friend explaining the state of his life at the time of the recording (no recording dates are given, but it was likely early or mid-2004). He and his wife Karen Brookman are in the process of moving to Barcelona and he, unable to hold a guitar pick, is experimenting with using his thumb to strum. Doctors have recommended surgery, but Bailey—ever focused on the process of music-making—is more interested in learning to play with the disability. He's not seeking sympathy. If anything, he's just relating what he seems to see as an interesting turn of events.

The rest of the six tracks were recorded in several week intervals after the open letter and titled by that timeline ("After 3 Weeks, "After 5 Weeks and so on). While it seems that Bailey's point was to document his abilities as they slip away, the record doesn't come off as such. Were he trying to play compositions or familiar tunes it might be apparent, but Bailey was such a personal musician that what comes through is deeper than that. Attentive listening does reveal declining dexterity, but focusing on that aspect of the disc—despite the titles—takes away from the beauty of it, which is simply Bailey's evocative playing.

It's rare to get such an opportunity with a great musician. Fans build close and often necessarily one-sided relationships with the artists they love. With Carpal Tunnel, we get the chance to spend a few final minutes with a beloved player.