By DAVE NATHAN
November 1, 2002
Sign in to view read count 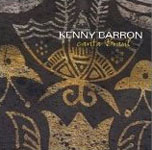 If one had to choose one word to describe pianist, instrumentalist and composer Kenny Barron, it would mostly likely be ubiquitous, in not only the kind of music he plays (which is most everything in modern creative jazz), but his in performing mates as well. Over the years, he has build relationships with the group Sphere, Ron Carter, Freddie Hubbard, Yusef Lateef and, of course, the near magical association with Stan Getz in the 1980's. On this his latest release, Barron has returned to his love affair with the Brazilian genre which he first cataloged in his 1993 release Sambao. His latest CD is a series of original compositions and arrangements. Each tune, while having a distinct character of its own, a la, the hyper "Zumbi" or the airy "Bachiao", has the common element of innovation and surprise that has made Barron's work so celebrated over the last few years. He seems to have lightened an up bit since his earlier sessions in the recording studio. Now as one of the most prolific recording artists on today's scene, Barron has built up a library of recorded music matched by few of his contemporaries and which highlights the universality of his compositions. On this outing, he is joined by a group of contemporary Brazilian jazz artists musicians who, like him, have an ingrained feel for these unique rhythms and melodies. While they all make important contributions, prominent among them is Anne Drummond's light as a feather flute which is instrumental in establishing that ambience of buoyancy Barron has established for each of these tracks.

There are several web sites about Barron, which can easily be identified by a Google search.

Zumbi; Clouds; Paraty; Until Then; Bachiao; Thoughts and Dreams; Dona Maria; This One*