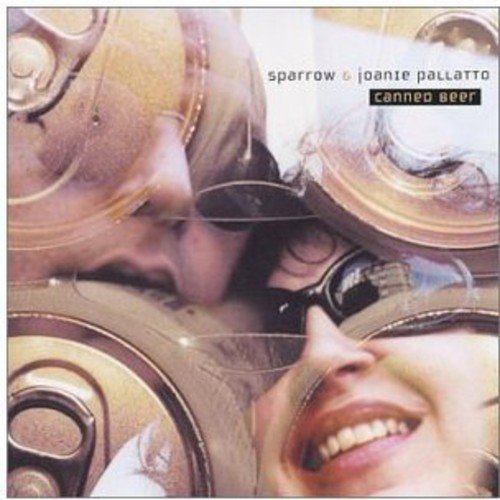 Left-fielders Sparrow and Joanie Pallatto have a lot of fun on Canned Beer, reminding us what kinds of music we’ve been listening to over the past few decades. Intentionally humorous, the album travels through time and space through the duo’s compositions.

“Recess” is light, and “Canned Beer” takes us to the beach. “Shopping” expresses the beat and ambiance of our pop culture with a “hook” in melody and a common thread in the lyrics. “Drum” soliloquizes on the mechanical aspects found in much of today’s hip-hop and smooth jazz culture. Saxophonist Von Freeman guests with a mechanical parody on a brief, contemporary item, while his younger brother, George, provides the expressive guitar for a longer, more robust companion piece.

Eldee Young and Redd Holt sit in for the album’s only swinging affair, “Walk on the West Side,” which boasts a true blues feeling along with ironic lyrics. As the song opens, you’d expect a traditional jaunt through a place where the blues walk is natural. It’s got that feeling. Then the lyrics belie the album’s demeanor with Young’s confession, “Got a million things I’d rather do than walk on the west side after dark.” We’ve all been there. Every city has such a place. The addition of accordion, complete with etude-like cadenza, drives home the message that these folks are having fun expressing things in their own sweet way.

World music finds its link through “Cop a Fifth (Ronrico),” “Thumbs” and “Part of Me is From Africa.” By including the sounds of a dog barking and a wild animal growling, Sparrow ensures that we get the point. And we thought Frank Zappa was funny. Sparrow and Joanie Pallatto have created a masterpiece that drives home a message: never take yourself too seriously.

Recess; Canned Beer; Not My Kind of Love; Shopping; Drum; Eat White Castle; A Pure Love; Cop a Fifth (Ronrico); Walk on the West Side; Judy Called; Thumbs; Part Of Me Is from Africa; Jody; And So Bartender.