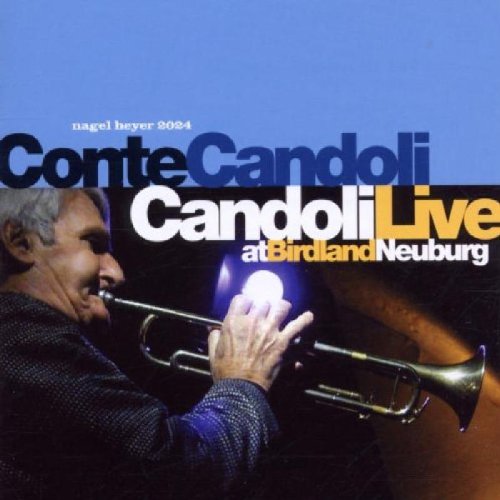 Secundo "Conte" Candoli (1927—2001) probably appeared as a sideman on twenty times the recordings he made as a leader. A member of Woody Herman’s Thundering Herd as well as Stan Kenton’s Orchestra, Candoli broke out to become one of the most sought after trumpeters recording. His resume supports this. He spent the majority of his career as a member of Doc Severinsen’s Tonight Show Band, where he worked from 1969 to 1992, when he and Johnny Carson both retired. Candoli Live was recorded a bit over 18 months prior to his death.

The recording is comprised of six lengthy quartet pieces, one original and five standards. Mr. Candoli is in fine form, dividing his time evenly between open-bell and muted performance. His tone is tart and tight and betrays a near-perfect melding of Be Bop heat with the West Coast Cool he is most known for. The recital rests on the fulcrum of ballads—"Lover Man" and "You and the Night and the Music." Mr. Candoli takes the Billie Holiday tome with muted restraint. Pianist Pichl provides the same in his lengthy solo, which is followed by a melodic pizzicato offering by bassist Zenker. "You the Night and the Music" is taken at a fast trio clip sans Candoli. Pichl opens the song in an extended introduction followed by a breakneck solo. Again, Zenker follows with a bright bass solo and then a Rick Hollander drum solo. Candoli, muted again, enters with a dark "Black Orpheus." He solos broadly and with authority.

is a dignified and understated swan song for an urbane and dedicated journeyman.