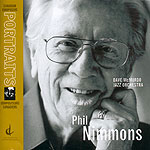 I don't know who conceived the idea for the Portraits series honoring Canadian composers, but it's a splendid one—even more so when the honoree is still vertical and swinging, as is the case with Phil Nimmons, who for more than half a century has been one of that country's most prolific and popular jazz musicians. This handsomely packaged three-disc set includes more than two and a half hours of wonderful music (every number written and arranged by Nimmons) by the superlative Dave McMurdo Jazz Orchestra, recorded live at the Montréal Bistro in Toronto, plus a fifty-minute documentary in which Nimmons discusses his long and distinguished career as composer, arranger, bandleader, clarinetist and educator.

Nimmons is not only present at the Bistro, he unlimbers his richly expressive clarinet to solo twice on disc two ("Suite P.E.I., 2nd Movement, "Night Crawler ) and again on disc three ("UTS, "Herbs ). His compositions and arrangements are warm, at times whimsical, and consistently engaging, and McMurdo's intrepid ensemble gives each one its due consideration.

Nimmons takes it from the top in the documentary (disc one), starting with his birth in 1923 in Kamloops, British Columbia, and proceeding through his early interest in the clarinet (inspired by Benny Goodman's radio broadcasts), his education at New York's Juilliard School of Music and the Royal Conservatory in Toronto, his role as a co-founder in 1950 (with Oscar Peterson and Ray Brown) of the Advanced School of Contemporary Music and, later, of the Jazz Studies program at the University of Toronto. Also covered: his career as composer and arranger for the CBC and as the leader of his popular group, Nimmons 'n' Nine (later Nimmons 'n' Nine Plus Six). In addition to more than 400 jazz compositions (including The Atlantic Suite) and arrangements, Nimmons has written many contemporary chamber and orchestral works for voice, piano, strings and larger ensembles.

One thing that is immediately apparent on the "concert discs (two and three) is that Nimmons is a natural-born swinger and a perceptive writer who knows how to bring out the best in a big band. Another is that McMurdo's orchestra, now that the Boss Brass has been disbanded, is Canada's foremost big band. McMurdo, who once played trombone for the Brass, learned his lessons well, and his orchestra sounds much like Rob McConnell's exemplary ensemble, but without the French horns. Like McConnell, McMurdo hires the best musicians he can find, and the ensemble is packed with all-stars, many of whom are leaders in their own right. McMurdo gives most of them one or more chances to solo, with invariably agreeable results.

Much as I'd like to go into detail about Nimmons' charming compositions, space does not permit such a meticulous appraisal. Suffice to say they are uniformly likable, as is McMurdo's enterprising orchestra. In sum, a fascinating Portrait, one that I hope is a prelude to others equally as inspired.