Campbell Brothers: Can You Feel It? 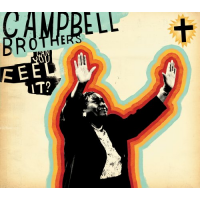 So, much should be expected from Medeski's latest find for Ropeadope: Rochester, New York's Campbell Brothers. Can You Feel It?, the Brothers' first Ropeadope release, exposes the roots of what made Randolph famous by sticking closer to the heart-held tradition of his church.

The brothers, like young protégé Randolph, come from the Pentecostal tradition of the House of God Church, the northern sister to the Florida-headquartered Church of the Living Ghost. Relying heavily on the testifying tradition of African-American gospel, the Campbell Brothers' sacred steel playing is full of higher power, natural energy, and pure religious passion.

Denise Brown, a longtime family friend and House of God singer, lends her voice to "Sign of the Judgement, which, like many of the tunes found here, is a selection that the Brothers perform regularly in the senior Campbell's Rochester church. Medeski gives "Good All The Time a touch of new school flare, with his oozing organ aided and abetted by the song's b-boy bounce.

D. Campbell sets Sam Cooke's "A Change is Gonna Come aflame with his lap steel playing. In place of Cooke's croon, Campbell wills a wealth of sounds from his steel, mirroring the human voice in moments, with soulful wails, cries, and calls. "Power Lord is a bit much for a secular audience it seems, but stunning syncopated clapping near the end of the tune is a small savior.

On the whole, Can You Feel It? seems to suffer from the natural blandness of studio recording; something tells me seeing the Campbell Brothers at home in their church, or on the road at a secular venue (the sort they are continually praised for being the first to play), would be far more exciting and engaging.

Despite whatever criticism he may receive for watering down the closely guarded gospel of the Sacred Steel, Robert Randolph's music is far more accessible than the Campbells' churchy sound. Can You Feel It? is a lot to digest all at once, and as the album drags on, it shows. Regardless, both the record and the Campbell Brothers are a worthy addition to the Ropeadope catalog.