The Vanguard Jazz Orchestra: Can I Persuade You? 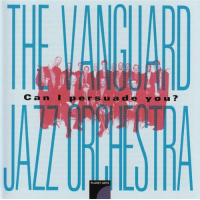 The title song on the Vanguard Jazz Orchestra's latest album was written by the late Julie Cavadini whose untimely passing at age thirty—one in 1988 deprived the Jazz world of one of its more promising big—band composers. Cavadini, to whose memory the album is dedicated, also wrote the lovely and harmonically radiant "Simple Wish," another of her several compositions that have become an indispensable part of the VJO's book.

Vanguard, which began life in 1966 as the Thad Jones / Mel Lewis Orchestra, plays them with dexterity and warmth, as it does everything else on this consistently dynamic studio date. In other words, the VJO continues to become ever more impressive as it carries forward the remarkable legacy of its fallen leaders. Personnel—wise, Vanguard is as well—endowed as any band one can name, and here it has amplified its conspicuous prowess with compositions and arrangements that are as pleasing to the ears as they are inspiring to the heart, from Jimmy Giuffre's darting "Dragon Fly" to Bill Holman's assertive arrangement of "Just Friends." Even with topnotch soloists in almost every chair, the VJO keeps the focus on the ensemble as a whole, which is as it should be. Usually, one or two players are featured and given ample room to stretch. Bassist Dennis Irwin and pianist Jim McNeely are the principals on Bob Mintzer's bouncy calypso, "Antigua," trumpeter Scott Wendholt on "A Simple Wish," baritone Gary Smulyan and trombonist John Mosca on Garnett Brown's charming out—of—tempo arrangement of Ellington's "Sophisticated Lady," alto Dick Oatts on "Can I Persuade You."

Once the last note had been played and the curtain drawn, this reviewer was persuaded that Can I Persuade You? represents, in sum, the VJO's best recorded work to date.