By John Kelman
September 22, 2008
Sign in to view read count 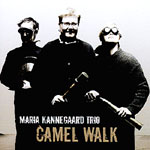 Camel Walk is Danish-born, longtime Norwegian-based pianist Maria Kannegaard's third trio release since Breaking the Surface (ACT, 2000), retaining the same line-up as Quiet Joy (Jazzland, 2005). Those looking for largely delineated solos may have to go elsewhere; Kannegaard's approach has more to do with gradual, almost hypnotic evolution and collective interaction than a conventional approach that, even in such a clearly democratic collective, places the piano front and center.

It's a modern approach to the piano trio format that's almost antithetical to its very core, yet creates a new aesthetic appealing in its combination of rich melody and oftentimes quirky compositional constructs. "Drifting down the Nile" revolves around a relatively simple premise, with Kannegaard rarely straying from her defined theme and circular changes; the pianist's persistent use of repetition referencing minimalist classicism without sounding anything like it.

Freedom also plays a large role in the process. "A cup of coffee and some danish pastries" begins in spare abstraction, with up-and-coming bassist Ole Morten Vagan—heard recently on Kannegaard's Maryland (Moserobie, 2007) and emergent pianist Havard Wiik's The Arcades Project (Jazzland, 2007)—and more established drummer Thomas Stronen (of Humcrush and Food), creating an oblique foundation for Kannegaard's quietly majestic motif to repeatedly emerge, only to dissolve again into more open-ended spontaneity. Stronen is listed as drummer, but his kit is an expanded one that includes all manner of hand and tuned percussion, used in subtle ways to create a broader sonic landscape.

The title track is an appropriately lumbering piece with a dense, repeated three-chord pattern supported by the fluid yet powerful Stronen. Kannegaard takes a more defined solo that's near stream-of-consciousness in its jagged angularity, but it's the overall build of the trio into a powerful maelstrom of sound revolving around a 3/4 time pedal point that gives the tune its requisite weight. Everyone finds ways to expand on the simplest of ideas: Vagan's arco harmonics create an otherworldly pattern underneath Kannegaard's initially delicate phrasing that ultimately builds to greater drama; while Stronen's dynamic shifts from sparsity to frenetic energy interact with Kannegaard's blend of repetitive, ham-fisted dissonance and clearer melody on "Hurry, slowly," a tune that swings in its own unique way.

Despite Camel Walk's avoidance of piano trio conventions there are traces of the many sources that inform Kannegaard's style, including Keith Jarrett, Bill Evans, Herbie Nichols, and Thelonious Monk. But despite Stronen's almost counter-rhythmic approach, the neoclassicism of "Sliding Doors," couldn't come from anyone but fellow Norwegian Ketil Bjornstad. If better-known groups like The Bad Plus and e.s.t. have popularized a more youthful and contemporary evolution of the piano trio, it's pianists like Maria Kannegaard, working in the trenches, who continue to redefine it. Camel Walk is a window into a new world where interplay and freedom are still signature, but form is less about conventional verse and chorus and more about pushing and pulling unorthodox but still thematic ideas to their unpredictable but ultimately inevitable conclusions.

Drifting down the Nile; Haunted; A cup of coffee and some danish pastries; Camel Walk; Bits; Quite at rest; Hurry, slowly; Sliding doors; Traveling pass; We interrupt for a short commercial.