By C. MICHAEL BAILEY
December 19, 2003
Sign in to view read count
Finally, we have made it to the end of this fine year. Below is a smattering of the finest recordings to come my way this year, along with links to the reviews. This list is separate from my Top Ten List, which will be derived from those below. 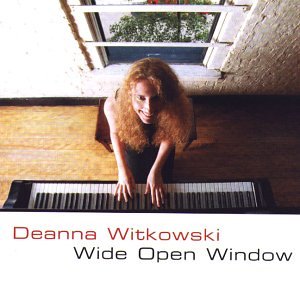 Deanna Witkowski—Wide Open Window
New York pianist/singer/composer Deanna Witkowski is perhaps the leading proté§© of the famous Cuban pianist Chucho Valdé³® That alone should make most folks stand up and take notice. Her Kheaon Records debut, Wide Open Window, should make the remainder rise. Her music potently reveals the influence of Valdé³¬ but this influence in no way smothers Witkowski's considerable talent. Continue...

Carrie Smith/Roland Hanna—I've Got a Right to Sing the Blues
Three types of creative authority that each spring from the same muse characterize this disc. First is the vocal authority of Carrie Smith. Second is the piano talent of the late Sir Roland Hanna. And finally, third is the lyric prowess of Harold Arlen. Continue...

Carlos Barbosa-Lima—Natalia
Guitarist Carlos Barbosa-Lima's previous Khaeon release, Mambo No. 5 was touted as one of the best releases of 2001. Mr. Barbosa-Lima opts for a smaller group this time, performing many of the selections solo or in duet with fellow label-mates John Benitez or Gustavo Colina on bass. Natalia picks up where Mambo No.5 left off, pursing a twentieth-century repertoire from Central and South America, Mexico and the Caribbean. The common uniting element is, of course, the selection's heavily Latin character. Jobim, Savio, Lara, Torres are all represented with an encore of the Webber/Rice crowd pleaser, "Don't Cry for Me Argentina." Continue...

Ron Miles—Laughing Barrel
Trumpeter Ron Miles is a bit of jazz anomaly, in that he has taken to shunning the urban genres of jazz. His recent releases are all about wide-open spaces and Americana. Nowhere is this better heard than on his Sterling Circle debut, Heaven (Sterling Circle SCS 151, 2002). On this record from last year, Miles dueted with guitarist Bill Frisell, giving a quaint, homespun touch to original efforts as well as earthen treatments of Dylan's "A Hard Rain's A gonna Fall" and Hank Williams (the only ONE) "Your Cheatin' Heart." The pair extended that same touch to "Stompin' At the Savoy" and Monk's "We See." Continue...

Marcus Miller—The Ozell Tapes
Marcus Miller is the Paul Chambers of the electric bass. His recordings possess the same bass-leadership as Mr. PC, reflecting the spirit in the title of one of Chambers' 1950s Blue Note releases, Bass on Top. Miller mixes a potent brew of originals and modern jazz classics to produce a sumptuously funky meal of what is certainly not smooth jazz. To my conservative ears, Miller simply picked up where he left off with Miles on Tutu. He is most certainly a virtuoso, but not so troublesome as Jaco Pastorious. Miller is a traditionalist in that, like Jaco, he never abandoned the modest four-string electric bass for its sexier multi-string cousins. More than that, Miller continues to use the Fender Jazz flavor. I would simply define Mr. Miller's musical approach as no bullshit. Continue...

Rene Marie—Live at the Jazz Standard
The biggest surprise perhaps on Rene Marie's inaugural live recording is the conspicuous absence of her controversial reading of Billie Holiday's "Strange Fruit" and the traditional "Dixie" in medley from her last MAXJAZZ recording Vertigo (MXJ114, 2001). To Marie's credit, she does cover her previously covered "How Can I Keep From Singing" (the title of her initial MAXJAZZ release). Stunning in this release is Ms. Marie's beautiful coupling of Ravel's "Bolero" and Leonard Cohen's "Suzanne." This daring association alone (the "Dixie/Strange Fruit" union not withstanding) qualifies Marie as a front-line jazz singer. Continue...


John LaPorta—I Remember Woody
The self-produced I Remember Woody was put together by educator, composer, and musician John LaPorta in honor of his former employer, the famed big band leader Woody Herman. If there ever was an independently produced recording that cried out for broader distribution, this is the one. Firmly conventional without being stodgy, traditionally swinging without being boring, I Remember Woody is a mainstream dream with a swing fan's heart. In his liner notes, LaPorta conjures the names of Ellington, Basie, and Herman in the same breath. Continue...

Jim Snidero—Strings
Jazz soloists especially like to make two types of recordings—those in duo with piano and those with strings. Art Pepper, Frank Morgan, Dizzy Gillespie and Jon Faddis made very fine piano duet recordings (Pepper and Morgan with the same pianist, George Cables, Gillespie and Faddis with Oscar Peterson). But seemingly, the Holy Grail of jazz is the recording with a string section, and many fine (and controversial) ones exist. Continue...

Ted Nash—Still Evolved
Still Evolved can be heard as an accidental suite, a collection of compositions that hang together independent of design. Ted Nash is most recently holding down a tenor chair in the Kennedy Center Jazz Orchestra. Here he turns his attention to small group performance and composition? with a hurricane-like creative force. Mr. Nash has composed eight pieces for the standard trumpet-tenor quintet. And the music is a fresh as strawberries bursting on the roof of your mouth. Continue...

Jeremy Pelt—Close to My Heart
Jeremy Pelt has the most beautiful trumpet tone exercised today. One needs to listen no further than his cover of Mingus' "Weird Nightmare," where one cannot distinguish his trumpet from his flugelhorn, save for a period in the middle section. On this piece, Mr. Pelt's tone is round and buttery warm in the first and third sections and simmering in the middle. Backed by a string quartet on several pieces, a "with strings" connotation would not have been off base. In fact, this disc would be comparable to Chet Baker with Strings had Baker had a modicum of Pelt's creative sense. Continue...

Geoff Muldaur—Private Astronomy: A Vision of the Music of Bix Beiderbecke
It is certainly not by accident that the Universal Classics Group is the label imprint on Geoff Private Astronomy—A Vision of the Music of Bix Beiderbecke. The rarely heard piano compositions of Bix Beiderbecke are majestically transformed into American chamber music by the loving touch and musical panache of another American original, Geoff Muldaur. For release during the Bix Beiderbecke Centenary, Mr. Muldaur's recording of Leon "Bix" Beiderbecke compositions, and compositions associated with the coronetist, can not so much be termed a tribute disc as eine hommage. Taking what are essentially sketches for piano pieces; Mr. Muldaur builds a precipice out of the notes on the staff using the tonal palette of reeds and brass capturing the whimsy and humor of the roaring '20s. Continue...

Cecilia Bartoli—The Salieri Album
Firstly, The Salieri Album is the finest recording of any music to come my way in 2003. That this it is not jazz is immaterial. Prima mezzo-soprano Cecilia Bartoli began a recording crusade spotlighting lesser known opera vocal compositions, beginning with Antonio Vivaldi, passing through Christoph W. Gluck, before arriving at the toast of Vienna, Antonio Salieri (1750—1825). Her dedication to this less frequently heard repertoire has produced several fine recorded recitals. Continue...

Cheryl Bentyne—Talk of the Town
Before rounding out my list of the best jazz recordings of 2003, I must make one addition. I had just received Cheryl Bentyne's Talk of the Town and was tempted to hold it over until 2004, and I am now most glad I did not. One quarter of the Manhattan Transfer, Ms. Bentyne established herself the Annie Ross of the group, possessing a breathtaking vocalese facility, a facility she uses most tastefully on her current recording. Continue...