John Ellis: By a Thread 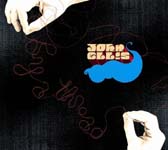 Over the past several years, tenor saxophonist John Ellis has developed a powerfully funky style. More recently, he has stretched out to bass clarinet and ocarina, releasing two well-received sessions as a leader and maintaining his integral part in guitarist Charlie Hunter's well-known trio. On By a Thread Ellis has brought together a quintet that delivers the funk, but also shines on multifaceted compositions which define a more mature sound. These beautifully melodic pieces serve as springboards to more adventurous climes.

Pianist Aaron Goldberg continues his association with Ellis. Newcomer guitarist Mike Moreno is able to adapt easily to the changing moods; in the process he showcases a touch that exquisitely adds to the rhythm section or strongly leads into uncharted waters. Ellis could not have chosen a better rhythm session: drummer Terreon "Tank Gully brings that same muscle he displays with bassist Christian McBride, as well as a marked percussive musicality that meshes wonderfully with bassist Reuben Rogers.

For By a Thread Ellis has added soprano sax to his already varied sonic palette, and the opening "Ferris Wheel is a quickly turning, wild aural ride of precisely played soprano. This is necessarily followed by the breath-catching rhythmically delicious "Tall Drink of Water and the smooth melodic flow of "Little Giggles." An ancient Eastern feel permeates the ocarina/guitar opening to "Old Man before the band turns the elderly gentleman on to a funky groove; and "Wishing Well features Moreno and Goldberg soloing in various directions, augmented by bass clarinet.

"Lonnie, with Goldberg on Rhodes, combined with some juicy tenor and down-home rhythms, would certainly please its namesake; the bluesy "Umpty Eleven is a forum for Ellis' wide range and Moreno's agility against a pleasing backdrop. "Swirl does just that, thanks to Goldberg's hypnotic lines, until the funkster "Moore's Alphabet," a paean to New Orleans drummer Stanton Moore, forcefully closes things out on the strong shoulders of Gully and Rogers.