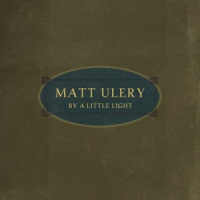 A unique blend of traditional jazz, classical, Eastern European folk, and modern idioms, Mat Ulery's By A little Light is steeped in a melancholic grace and shadowy beauty that provides the two-disc set its unifying force. Throughout, Ulery has chosen detail and the oblique over the grandiose to etch his dusky scenes and portraits that seem to capture discreet emotional moments the way master photographers can distill vast meaning within a single frame.

Bespeaking Ulery's consistency of approach there are neither highlights on the album nor any excess. Its twelve tracks are divided equally over two albums. The first is instrumental and the second consists of one instrumental piece and five vocal on four of which Polish- born Grazyna Auguscik lends the mournful tinge of her distinctive voice to Ulery's lyrics while Ulery himself performs the last "Broken and Blinded." The entirety is infused with an elusive blend of Romantic period classical arrangements, replete with that period's focus on folk music, jazz rhythms, and modernistic minimalism.

In each instance Ulery's compositions unfold like a Milan Kundera novel, the overall narrative evoked through an interwoven series of muted emotional inflections, small moments, and refined gestures, all unfolding at an unusually patient developmental pace. The haunting melody of the title track surfaces like faded childhood memories and lingers in the mind long after its final notes have faded; 'The Shortest Day"'s combination of Romantic piano and violin conjures darkened skies, crumbling architecture, and conversations whispered at sundown; "Gone as it Always Was" reaches into the corners of longing, while "Broken and Blinded" leaves one walking alone up the cobbled steps of regret.

Ulery's compositional clarity, constraint, and understated aesthetic allow the album's seeming diversity to avoid the lack of cohesion that plagues other eclectic works, often leaving them without a central purpose or mired in self-indulgence. Here Ulery is neither flaunting his "versatility" nor engaging in a cerebral exercise of genre morphing. Instead he has internalized many musical influences and allowed them to flow forth in one unified creative stream. The result is distinctive and affecting.

Dark Harvest; By a Little Light; To Lose Your Mind; Wilder Years; Shortest Day; The Miniaturist; Processional; Somebody Somewhere; Broken and Blinded; Sow the Deep Seeds; To The Brim; Gone as it Always Was.